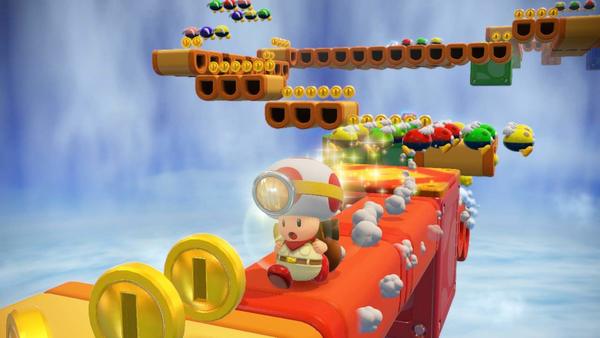 “We always think about how we can introduce 3D games to more people. We thought that Captain Toad in Super Mario 3D World was perfect because it brought in the element of searching to [Mario’s] world. We wanted to build a sandbox: a small, contained world that has a linear path, and someone that could not jump. By having a main character that couldn’t jump, we thought it would be easier for the player to explore the 3D world. Also, we would be able to contain the world and not make it too big.

But at the same time, perhaps the experience of controlling the camera would also be a fun thing to try. We thought about how we could have players that are beginners control the camera and control the game. We thought that putting the whole stage in one screen and changing the camera angle could be a fun [way to play]. That way it’s ... easy to approach. We wanted to explore that as a core mechanic of Captain Toad, and that’s how we ended up with those miniature worlds.

We thought Link would be a little too courageous and he would want to fight enemies with his weapons. Captain Toad is still courageous, but maybe a little bit weaker, and by having a character like that we thought we could have the player focus on the geography and turning the camera, that kind of gameplay. In the end I think it worked out really well.”

Could there be even more Captain Toad in the future, perhaps through a sequel or DLC levels? Here's what Hiratake had to say.

“Is that something you’d want? It really kind of depends on how people respond.”

They could have used Ravio.

No! Should have used Tingle! LOL

I thought we knew this years ago when Super Mario 3D World came out.

I hope we get a sequel someday. Though hard for me to imagine how much further they can stretch the gameplay into new and innovative territories. I felt the first game pushed the concept to it's limits. But who knows Nintendo's developers (especially the EAD Tokyo team) are a lot more smart and creative than I am.

“Is that something you’d want? It really kind of depends on how people respond.”