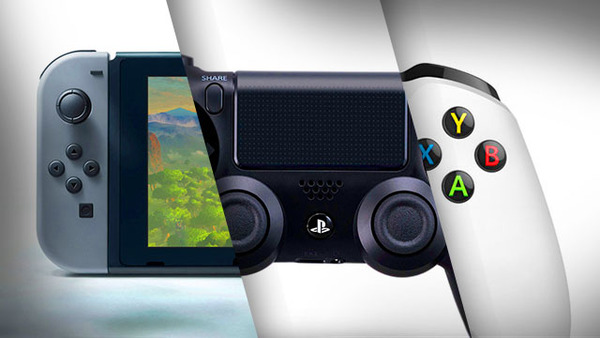 NPD's Matt Piscatella has shared an interesting tidbit about Switch owners here in the states.

According to NPD's Games Acquisition Monitor, at the end of Q1 ballpark of 70% of people in the U.S. that owned a Switch also owned a PS4 and/or an Xbox One. Cross ownership across all 3 consoles is pretty high compared to prior gens. Each system is differentiated enough that a big chunk of people that are into console gaming own multiple systems. Now arguing primary vs secondary doesnt make any sense. Each box does its own thing and each does it well.

I have a Switch, PS4, and Xbox One. I'd be interested to hear what you guys have at home. Is Switch your only current-gen system, or do you have others under your TV?

If you were talking about WiiU, would agree. I honestly think Switch has too many games now.

I've got a PS4 for multi-platform games and Sony exclusives. I ceased being a Nintendo-only household during the Wii era.

I have a Switch and I don’t need anything else.

Not surprised really. People that are gaming a lot wouldn't have enough games to go through just on the Switch.

If you were talking about WiiU, would agree. I honestly think Switch has too many games now.

It depends I guess on how big of an interest someone has in indie games. If someone is mostly interested in bigger titles, they will definitely need a companion platform.

I’ve always run a Nintendo-only household. We have 3 switches currently. Every now and then I’m envious of a PS exclusive, but for me at least, those moments are rare and more than outweighed by the plethora of fantastic Nintendo exclusives.

I have a PS4, but haven't bought anything or played it since Switch came out. I feel like the better combo is Switch and gaming PC.

Here are some important words about my PS4 ownership so I can meet a 20 character limit; it used to be owned by my roommate.

Growing up we were always a Nintendo only household.

Then one of my older brothers got a PS1 but I rarely played it.

My eldest Brother has an original Xbox but he wasn’t living at home then.

During the Wii era I bought an Xbox 360 for myself and later built my first gaming PC when I had moved out of the family home.

Now I have a Wii U, collecting dust, a Switch and newer gaming PC. I don’t see myself straying from the Nintendo + PC Combo in the future.

Good, the best case scenario is when as many people have all 3, though I guess a PC is basically an Xbox One at this point anyways.

I have a Switch. My son has an Xbox One.
I am not sure how that works out.

I have a switch and ps4 but I don't buy a lot of ps4 games. This year I only bought detroit become human, and I have shenmue and spiderman preordered, but I have a massive backlog on my switch. I have a wife and a little boy and I can't really stay in front of the tv, but with my switch and can play anywhere, on the couch in the bed and when it's possible on the tv. And I'm hoping for a port of nier automata on switch.

Not surprising considering the portable nature of the Switch compared to the other consoles.

I own both a Switch and PS4. I won't lie I do play Switch more and the few multiplats that come to Switch, I get on Switch because I like the portable nature and I like the joycons more than the dual shock.

I only have a few games on my PS4. I'm getting Spider-Man for sure that game looks fantastic. Last game I got before that was God of War and while I enjoyed what I played of it and got a little past half way. I just got bored of it and personally I much prefer the old gameplay style than this new Dark Souls/Bloodborne esque play style. The only other PS4 games I own are Uncharted 4, Lost Legacy, Batman Arkham Knight, and Resident Evil 7. All great/fun games but once I beat a single player game I'm done with it. So in total I own about 10 PS4 games (if im counting Street Fighter V, Black Ops 3, NBA 2K18, and Tekken 7 which are all my brothers) compared to my 53 game Switch collection.

Out of the current generation I own a Switch, 3DS & Wii U.

Nintendo only household here with Switch and WiiU, but we do occasionally dip into some PC games. My kids have loved having Fortnite on Switch and play it all the time now. Splatoon 2 has been lonely.

I've always been a Nintendo fan, but I like too many games to limit myself to just Nintendo consoles. Nintendo makes top quality games and I will never deny them of that, but there are too many gaps in between them where they release nothing of interest to me. Take 2018, where so far they've released nothing that I want to buy; though I would've bought Kirby on day one if it wasn't local multiplayer only. What is left for 2018? A Pokemon spin-off game and Super Smash Bros. and I'm not interested in either.

What is left for 2018? A Pokemon spin-off game and Super Smash Bros. and I'm not interested in either.

I think you're forgetting the best Switch game of the year, Super Mario Party! ;)

You're right, I did forget about it. I want to hear more about the online mode before release, but as of right now it has a higher chance of me buying it than Pokemon or SSB do.

Hooked up to one TV is a Switch, Wii U, & Wii. Hooked up to another TV is a GCN, N64, SNES, & NES. I also play on 3DS. On PC, I just have Guild Wars 2, MechWarrior Online, & Spy Party. I haven't been able to get the Free version of For Honor to work with any of my Nintendo controllers, even though it worked during the beta.