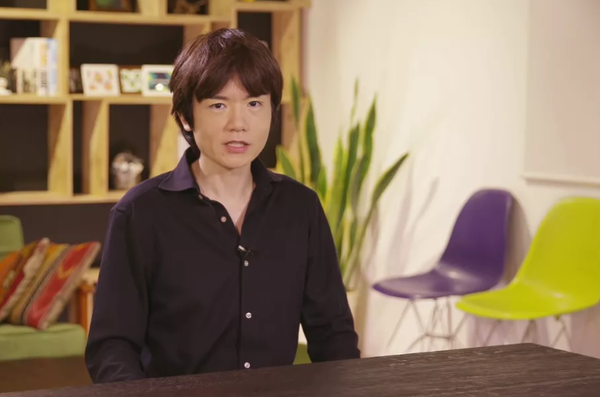 All it took was two chairs for the collective internet to lose its mind.

During today's Smash Bros. Ultimate Direct, Masahiro Sakurai sat alone in a room and talked all about new characters and features coming to the game. Off to his left were a pair of empty chairs. One of them purple, and the other yellowish/greenish. That's all it took for Smash Bros. Ultimate detectives to confirm that Waluigi is coming to the game.

Some people believe that the chair setup is 100% confirming Waluigi's playable appearance in the game. Others say it's just two chairs and means nothing. Hell, I'm not even sure that one chair is yellow. What do you have to say about it all?

Get your straws here. Free straws for grasping right here!

Good lord, really?! I’m starting to not ever want Waluigi as a playable fighter in Smash if this is how fans are gonna act.

Get your straws here. Free straws for grasping right here!

This is considered entrapment here in California.

Hang on....did anyone notice SAKURAI in the video?! Playable confirmed!

Hahaha! I'm all out of upvote clicks for the day but both of you guys would get them if I could. Made me laugh.

I like Waluigi but I was never clamoring for him to be in Smash. Maybe if he got a starring role or a co-starring role in a main Mario or Wario game I'd be like "Yeah Waluigi should be in Smash" but he's spin-off fodder. Not saying Waluigi fans shouldn't have their character in Smash but stop grasping at straws and being disrespectful to Sakurai.

The chair definitely isn't yellow... but they wouldn't manufacture chairs for something like this, and it's hard to imagine there are a lot of options for buying chair sets that have a purple one and a yellow one of just the right hues in the same set.

I associate purple and yellow more with Wario than Waluigi.

They're gonna pull a muscle from all this stretching.

Or maybe Sakurai is a L.A. Lakers fan.

And lets be honest.. most of the "WaLuigi" fans don't -actually- want him. They just got obsessed with the meme.

That is a very green chair.

I don't understand the love for Waluigi. It's ok to see him team up with Wario every so often and wasn't he already confirmed as an assist trophy? If he's added that's fine for others who like him, but I would rather see other fighters like Banjo & Kazooie.

But then again, people think Rhythm Heaven's Karate Joe was teases due to DK watching TV and scratching his butt

Waluigi as an echo fighter to Wario makes a lot of sense to me.

I think it's more likely for Waluigi to be an echo fighter for Luigi.

I never thought of that but that probably makes even more sense.

I don't think it means Waluigi or anything, but I DO think it was intentional. I mean, the Direct has at least two blatant tricks from Sakurai (the music count and the King K Rool bit), so this wouldn't surprise me if it was another gag on his part.

Amazing how they can be so perceptive to spot the colour of those chairs and at the same time fail to notice that Waluigi is already listed on the official website as an Assist Trophy...

An assist trophy is very different from a playable character. Besides, having a character both playable and as an assist trophy would be quite confusing for the players (which one is which?) and - let's face it - silly.

That's not even really Waluigi green. No, that's a tease for Transformers' Devastator!.

When did Waluigi start getting so much of demand?

I believe Brawl in the Family started it though I may be wrong about that.