King K. Rool creator shares his thoughts on the character being added to Smash Bros. Ultimate 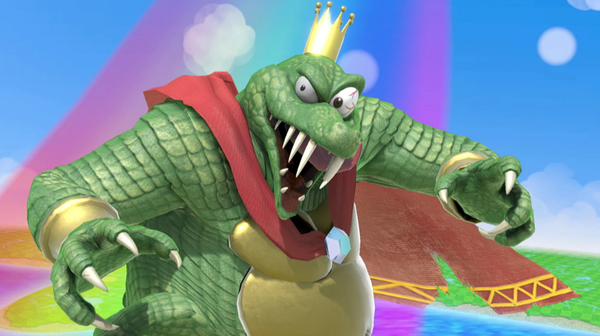 The internet rejoiced when Nintendo revealed that King K. Rool was being added to Smash Bros. Ultimate as a playable character. He's definitely been one of the most well-received reveals thus far, with fans still buzzing from the surprise. Think of how it must feel to be the person who created the King! Nintendo Life talked to the man himself, former Rare designer Steve Mayles, about what it's like seeing his creation join Smash Bros..

"I had no idea he was going to be included. I knew he had a fair chance as he had appeared as a Mii costume previously, and since then he has been at the top, or close to the top, of many votes and ballots. There seemed to be a real groundswell of positivity in K.Rool’s direction that Nintendo would find hard to ignore, I thought. I’d love to have been involved in any capacity of bringing K.Rool back of course. Maybe another time.

K.Rool was a big part of the Rare-created Donkey Kong games in the '90s but since then has fallen out of favour for some reason, but let’s ignore that, he’s back now! Some fans on the internet had made it their personal mission in life to bring back K.Rool, restore the King to his former glory; this passion amongst gamers always amazes me. I saw footage of the Nintendo Direct from the Nintendo store in New York with people chanting 'K.Rool, K.Rool' – it was great! I have no doubt the fans' attitude to K.Rool and the proactive way they went about supporting their favourite crocodile made all the difference.

He looks really great, a perfect modern interpretation. I couldn’t have done a better job myself! They’ve obviously paid close attention to his original design and updated him sympathetically; that really pleases me. Even the shade of green is correct and the gold armour, something that had been changed in other recent versions of K.Rool. The whole Nintendo Direct reveal was superb, the quality of the rendered sequences top-notch. K.Rool couldn’t have come back with a bigger bang! It was the whole package, even down to the incredible remix the King is getting of his famous Gangplank Galleon theme."

Who's next on the list with the fans in terms of popularity but has never made the cut?

Skull Kid, Geno, Isaac, Banjo-Kazooie and Bandana Dee seem to be among the most often requested. Could be forgetting someone.

There are many devs, no, artists in general who hope their works will gain the kind of admiration we are seeing for K. Rool today. I really do feel a genuine happiness and comradery for this man. Though I may never get to were he is with his creation, I can sleep soundly knowing that that dream can come true for anyone if risks are taken and things play out just right.

I really wish Rare had stayed with Nintendo. The world would have been a much different place then it is now.