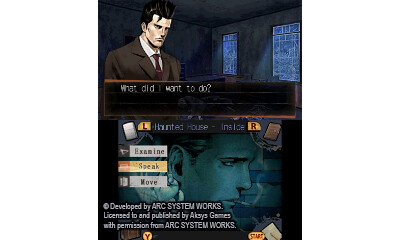 In Ghost of the Dusk, A homeless man’s accidental death draws hard-nosed detective Jake Hunter into the shadow of a mysterious mansion—but all is not as it appears at the seemingly innocuous crime scene, and Jake can’t shake the hunch that something is amiss. With the help of an old friend, Jake works to get to the bottom of the crime and uncover the true culprit’s identity. But when the mansion’s owner comes to Jake with a new proposal, things take a turn for the bizarre as dark secrets are forced from the shadows. Now, it’s up to Jake to track down the source of the madness.

For Love begins with Jake saving Tripudio District bar owner Crystal Moon from a gang of predatory loan sharks. Afterwards, she hires Jake to look into a rumor spreading throughout the underground elements of Tripudio about a tragedy born out of a deep, abiding love.

It’s taken eight years, but Jake has finally come close to finishing a task first instigated by a woman named Rachel Hall who entrusted him to deliver a sealed envelope to her daughter Karen Tran, but she adamantly refuses to accept it. Follow Jake through across almost a decade in the bittersweet Forget Me Not.

Two young men meet in front of an antique shop called Four Seasons whose storefront is bathed in the light of the setting sun.
“I guess Mr. Hunter isn’t going to make it in time after all...”
“Don’t worry about it. I still have faith in him.”
What promises did Jake Hunter to these two? A new case begins to unfold with the eponymous antique shop at its center.

Ghost of the Dusk also includes the special episode Jake Hunter Unleashed! School Festival Locked Office Case. On a rare day off Jake heads to the M college campus with his stalwart assistant Yulia for the school’s famous summer festival. Unfortunately for poor Yulia they arrived a day early so instead of awesome food, drinks, and entertainment the only things waiting for them were silence and disappointment. However, before they can leave the campus the sudden distant wail of a siren draws Jake and Yulia into a case involving an asphyxiated club member, his less than cognizant friends, and an a number of mysteries to be unraveled. Will Jake be able to overcome red herrings, unreliable witnesses, and Yulia’s over exuberance to solve the case, or will his ultimate reward be a rocket-powered punch to the face?

Features of Jake Hunter Detective Story: Ghost of the Dusk and other stories include:
New Cases, New Faces - After a long hiatus, Jake Hunter is back on the beat and tasked with solving all-new cases with a cast of original characters and the return of some familiar friends.
Investigative Instincts - To solve these mysteries, you’ll need to use all of your master detective skills: question suspects, search crime scenes, and zero in on inconsistencies to discover the truth.
Hardboiled Action - Dive into a gritty world populated by shady characters, dubious allies, and more than a hunt of the supernatural. You’ll need to harness all of your focus and skills to separate fact from fiction.
And the Password Is… - Discover passwords hidden throughout the game’s world to unlock side stories, bonus features, and more!

Jake Hunter Detective Story is rated T for Teen with descriptors for Language, Mile Blood, Mild Violence and Use of Alcohol and Tobacco.