Ubisoft says questions of Starlink: Battle for Atlas' StarFox content being canon should be directed at Nintendo 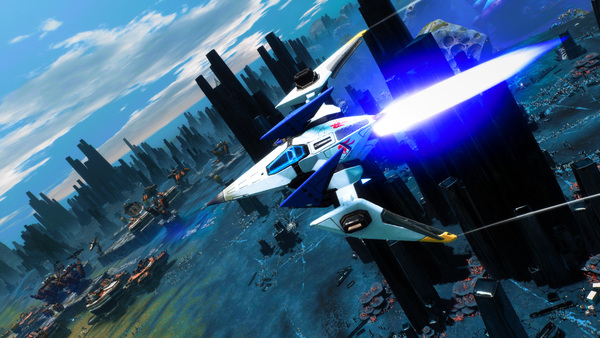 The StarFox team is popping up in Starlink: Battle for Atlas with an adventure and missions all to themselves. The content certainly looks like a blast, but is it canon? When a Ubisoft rep was asked about the nature of the content, he said any discussions about canon should be aimed at Nintendo. In other words, Ubisoft isn't ready to say that the content here is canon for the StarFox franchise, and Nintendo hasn't uttered a word on the topic.

Canon and StarFox are two things that don't go together.

Haha, seriously. Almost every single entry is a "re-imagining" of the first game.

Everyone seems to forget that one. Plus when they did try new ideas, Adventures, Assualt, Command everyone wanted 64 again. If anyone's to blame for the same game again and again it's the fan outcry.

IMO Assault is underrated. Adventure made me want to pull my hair out, so I feel it's more justified in its hate.

Adventures was okay...Assault I'd argue is still the best Star Fox game we've gotten since 64 (not counting the 3D remake) and is severely underrated. Hell I put Assault up there with 64. YEAH I SAID IT! Command and Zero were both hot garbage IMO. This game however looks to be FANTASTIC and probably the best/only Star Fox game we'll ever receive in the near future.

Starfox has really only had a couple stories, one has been re-told several times already. That later stories has taken advantage of merging a different series into the Starfox universe so I wouldn't be too out there when claiming that Starfox has developed into a cross over franchise.

That's not a bad thing by the way, few franchises have that reputation. To be able to play with other universes whether they carry over to another game or not doesn't matter so long as we get new stories.