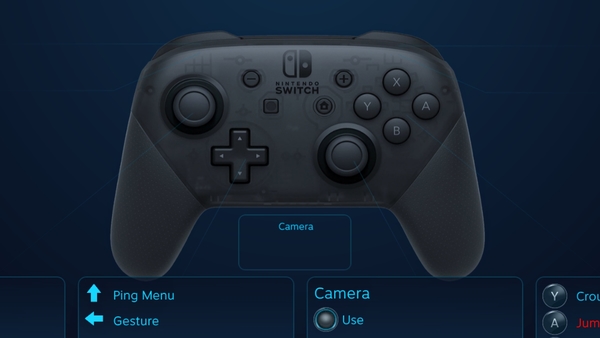 Nearly half a million Switch Pro Controller users have taking the controller over to Steam for some PC fun. This data comes from Valve themselves, who broke down what controllers users are enjoying games with.

The Switch Pro controller arrived in 2017 and players immediately began attaching them to their PCs. At the time, support was mostly limited to basic Steam Input remapping; meaning the UI did not match the physical device and features like motion control and rumble were not available. In May 2018, a Steam update enabled the full feature set of the device, added matching artwork in the UI, and improved the overall experience. The result was an acceleration in Switch Pro controller registrations, and a rise to the 7th most popular controller type on Steam.

As you can see, the chart also shows hundreds of thousands of players using controllers from the SNES, GameCube, N64, and more as well. There's a lot of Nintendo love going on with Steam fans!

I used mine with Steam. Even has the option to correctly map the in-game prompts so if the game says press A (and it means Xbox A), you don’t have to press B on the Pro, you just press A

I still hate the fact that Nintendo and Microsoft use the same power button letters but in different order. I´m always mindfucked when I switch between them.

I’m playing Assassins Creed Origins on PC with an Xbox One controller. I have too look down every time the game says press B

Oh no! Well, I really feel sorry for you! My first time with an Xbox-Controller was at a CoD-Multiplayer-Party. Also there was no light for Looking on your controller, because we played on a cinematic screen :D
My Friends had been like gods in this game, but I myself sucked just as one could possibly suck. Yeah, t´was hard...

I got a free demo of For Honor that is not the Steam version. I think it's just directly from Ubisoft. However, I cannot get it to work with my Switch Pro controller. Even the Beta worked with the Wii U Pro controller, but This Free Starter whatever won't work with any of my Nintendo controllers.

damn, you missed out on the free version they were giving out on steam.

Anyone care to tell me what the big complaint about the Switch Pro Controller's D-pad is? I hear people complain about it way too much, but from my experience it's pretty OK!

It isn't nearly as accurate as older controllers. It's almost impossible for me to use it for tetris without accidentally pressing up or down when I want to go side to side.

Odd. I'll give Tetris vs Puyo another go and double check it.

I didn’t notice any problems with it until I got the jet pack v2 in Cave Story+. It got so bad using the pro controller D-Pad for that game that I had to use the joy cons with the less than ideal directional buttons to finish it.

If you have one of the special edition controllers then you may not have the problem at all. It seems they have fixed the issue after awhile. Idk about new normal ones but both my splatoon and Xenoblade controllers are fine.

I'll admit that I am mostly playing Octopath these days and rarely use the D-pad. But I have played several other games with it where I use it a lot and haven't felt any issues so far. Even the NES games seem fine.

How many of these people use their Joy-Cons away from their Switch? I bet not many, well the charts proves it must be infinitesimal. I honestly believe it's probably the worst controller Nintendo have ever made. Actually, the first and only bad one they've made. I get that they had to compromise in its design but that doesn't change the fact that it's truly awful. The Pro Controller feels infinitely better. And the SNES controller is a classic, you can't beat it.