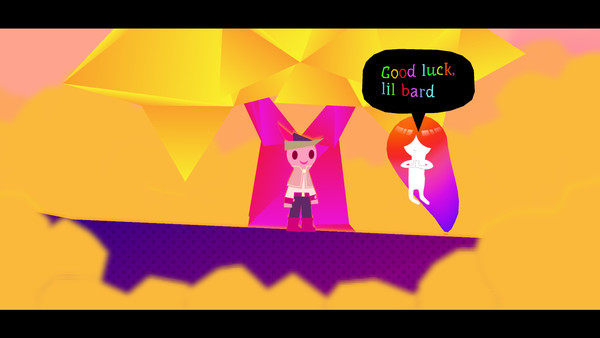 Wandersong hit the Switch last week, and unfortunately, there are a number of issues that might crop up. While the team works on an official patch, they've provided a list of potential issues and workarounds for the time being. Check out the full rundown below.

This is a list of known issues on the current console version of Wandersong! A patch will be going live to fix these things as soon as possible. In the meantime, you can reference this page to work around the issues.

If you have an issue that you don't see listed here, please let us know by twitter (@theBanov, @wandersong_Game) or by email (banovg@gmail.com)

ACT 2: Crash during band performance
This issue only seems to occur rarely, and randomly. Players usually can pass this by resetting enough times. Turning off screen shake in the options may also help make it more stable!

ACT 2: Infinite loop in the Crazy Raven backstage room after the performance
If you mash the interact button, you can escape this unfortunate loop!

ACT 3: Crash when talking to Captain Lucas in the pirate bar
This issue arises when you talk to the Captain from the left only. Talk to him from the right and it will work!

ACT 4: Crown stuck in air after finale scene
This issue arises if you have screen shake turned off. Switch it on briefly and jump to initiate this sequence.

ACT 5: Soft lock in the first castle room with Audrey
This issue arises if you try really hard to get on Audrey's nerves. The best way to work around this issue is by re-loading this chapter of the game with the "Scene Select" cheat code.

ACT 5: Crash at end of forest boss
This issue only arises if you close and re-open the game in the second half of this sequence. Unfortunately it's a bug in save data, so the best way to work around this issue is by re-loading this chapter of the game with the "Scene Select" cheat code.

ACT 5: Clipped through a wall in Mohabumi and can't get back to the other side
If you find yourself stuck behind a crystal wall, you can turn them transparent with a special song (sorry for the spoilers). You just need to sing Right, Down, Left.

Something is too frustrating or challenging, or another issue is blocking progress.
When all else fails, there is a secret "Scene Select" in the game that will let you jump to any section of the game, or re-load your current scene if you're encountering a bug. Scene Select is a feature normally unlocked after completing the game, and will even let you skip ahead. Use it wisely!

Once unlocked, it will be available on the pause menu in place of the "Credits" screen.

My Nintendo's Super Mario pin set officially sold out
Sep 22, 11:26 by phantomliger Sep 22, 11:00 by acmiguens
French consumer organization looking to sue Nintendo over Switch Joy-Con drift, says it's part of a "planned obsolescence" scheme
Sep 22, 11:25 by amb Sep 22, 10:52 by grcpan
Standard physical releases for Ori and the Blind Forest: Definitive Edition and Ori and the Will of the Wisps coming this year
Sep 22, 11:18 by sligeach_eire
Polish retailer updates their website with multiple mentions of "Switch Pro"
Sep 22, 11:02 by acmiguens