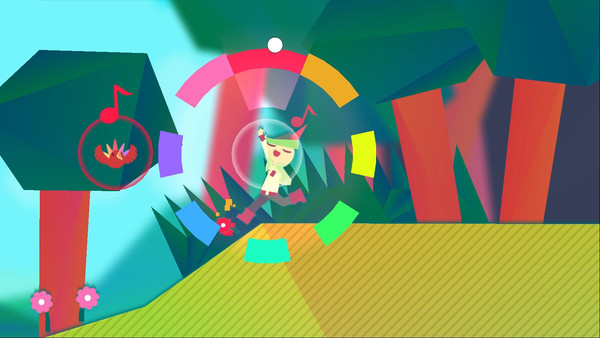 It's an uneasy time in the world right now. Temperatures are flaring for all kinds of reasons. There's a lot of civil unrest right now, and plenty of people feel like the world has become a much darker version of itself. Or at least, those ideas that were always bubbling under the surface are now front-and-center. Wandersong creator Greg Lobanov has felt that, and it's one of the main reasons he kept pushing ahead with the game.

In an interview with GamesIndustry, Lobanov discusses the current climate in the world, and how Wandersong fights back against the cruelness and anger out there right now.

"It has a really big emphasis on positivity, optimism, pacifism, non-violence, and empathy. It's not just that it's a peaceful or happy game, but it includes a conversation about being that kind of way. It talks about violence in games a little bit. It talks about how other games solve problems, and then presents itself as the argument against that.

When I started this game, it was around when Gamergate was kind of at its tail end. There was this feeling like, 'Wow, this crazy, fucked up, toxic thing going on in our industry was really weird. Glad that's over.' But there was still this weird feeling of distrust between people, and general depression. Everyone was feeling weird and unhappy with each other. I just felt that, right now, we needed something to build bridges again, to say, 'Let's remember that most people are actually really good.'

At the time, it felt maybe slightly relevant to what was going on. Then as time passed, to me it felt like the game was more and more relevant in a way I really didn't expect. It's not really good that it became more relevant, but the game now feels like a way more crazy piece to make than it did three years ago when I started. And I didn't anticipate that at all, but I'm really glad to be making something that has this message right now.

It's coming at a time when people are just desperate for media that's positive, that can give a hopeful vision for the future, but is also honest. We're trying to make a game that's happy through understanding rather than ignorance. We try to have a conversation and find optimism in that."

Nope. Humans mostly suck. If you find a good one, hold on to them.

Trusting other people is one of the most important factors of a successful life.

Many people I trustrd have stabbed me in the back, so I'm just goinh to disagree with you ;)

The world is what you make it.