Smash Bros. Ultimate Switch bundle being auctioned off on eBay 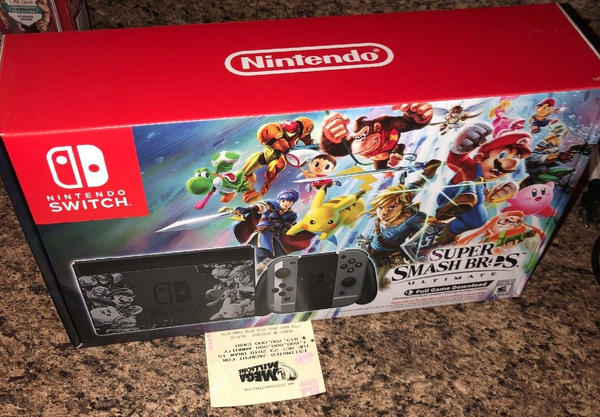 How...how does this stuff happen?! Somehow, some way, someone out there has gotten their hands on a Smash Bros. Ultimate Switch bundle a bit early, and they're putting it up on eBay. This includes a download code for Smash Bros. Ultimate, but obviously that won't be redeemable until Nintendo actually makes the game live on their eShop servers. That'll happen when press gets review codes, and no one knows when that's happening!

Thanks to Dondom95 for the heads up!
Source: Link, Link
Rating: 0

With a winning lottery ticket, too?

You want to believe that maybe they lucked out in "tricking" a store clerk to sell it and the streetdate isn't in the system yet. But theft is probably the correct answer. Worked many years in retail and the amount of backroom theft is pretty high, specially around this time of year with all the seasonal employees who wouldn't care if they get fired, or ever show up again.

I wonder will Nintendo try to intervene somehow. Maybe win the auction through a ghost account, get the persons details and then pass them on to the authorities.

I bet Nintendo's happy that they started using codes.

Why would stores even have the bundle so early?

More power to the sucker who wasted money on this to buy a Switch that is identical to all others except for a few decals.

I know some retailers may get their shipments earlier. Like a week before release, maybe.
But almost one and a half months prior? I have my doubts.

Maybe it's just the packaging, maybe it's stolen from a warehouse. Who knows, but I don't believe this is legit.

There were other pics on the eBay post showing the insides, console and joycons too. Looked legit.

These come out next week and the codes are preorder codes so it'll be fine from leaking.