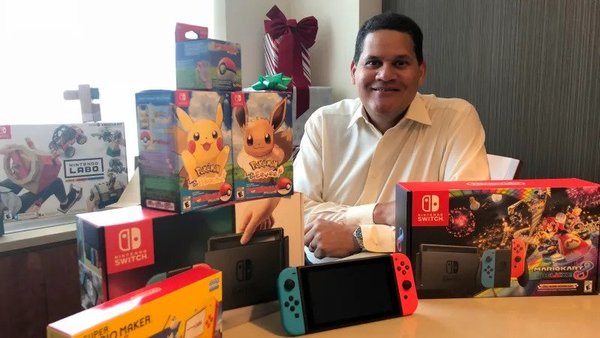 Nintendo's Reggie Fils-Aime is doing the press circuit to spread the word on Nintendo's holiday offerings. As you might expect, the big man believes Nintendo has some very heavy-hitters in the wings. While pitching titles like Smash and Pokemon, Reggie shared the following tidbits in a Kotaku interview.

- 3DS has had growth year-on-year for the first three quarters of the year in the Americas
- Reggie certainly hopes the 3DS has many more years ahead of it
- Nintendo believes they've planned well for bundle stock with Pokemon: Let's Go Pikachu/Eevee
- the hardware bundle for Smash Bros Ultimate is “effectively sold out”
- Reggie reiterates that Smash Bros. Ultimate is a brand-new Smash game
- Reggie says Sakurai will continue to tweak the different characters until launch and even past launch
- Reggie says October, November, and December are critical to Nintendo hitting 20 million Switch units sold this fiscal year
- Reggie says the Americas are "well-positioned to do their fair share to meet that goal”
- for the first 12 months of availability, Switch in the United States was the best-selling system of all time
- the goal is to continue that trend
- Nintendo wants to be in a position coming out of the holidays where we can be proud of our results compared to the Wii
- Reggie would have loved for Smash Bros. Ultimate to come out earlier in the year, as December is a challenging month
- Reggie says third-party support on Switch has been quite strong

Someones trying hard to be controversial.

3DS will continue being a profitable little cash cow for another while yet. Just saw Mario Kart 7 (yes...7) re-enter the sales charts.

I hope there is enough supply to meet demand for those planning on getting a Switch with Pokemon and Smash releasing. Or do I have there isn’t enough supply? Either way I hope Nintendo has a good next 6 weeks of sales.

I've recently been seeing piles (yes, piles!) of Switches at places like Best Buy, and I don't know what demand is like, but it gave me the impression that if this far away from Christmas you can build a fort out of Switch boxes, they're probably in good shape supply-wise. But I'm sure events like Black Friday and the Pokemon/Smash release could catch us by surprise.

I really hope Smash Ultimate is Sakurai's last Smash game, I'd hate to see his talent be cornered to one franchise, when at this point, his goal his mostly just to one-up his efforts from his last project.

It's that time of year again, Christmas is approaching, time to roll out the clown. Let's see what gems he has this time.

He's still peddling this nonsense and trying to convince everyone, even at this late stage. It's not a lazy port like most of the others but nor is it entirely new either. It's a continuation of the Wii U version, adding in content from previous games with a sprinkling of new fighters and features. It's not all rosy though, they removed Trophies and we still don't know if staples like Break the Targets or the Home Run Contest are still intact.

Well obviously. January to March are going to be low, especially by comparison.

"Reggie says third-party support on Switch has been quite strong"

Define "quite strong" Reggie, because that's not what I'm seeing.

Someones trying hard to be controversial.

I know Reggie can be very annoying, but I don't know if I would go that far as to call him controversial. Besides, he doesn't have to try very hard, it just comes natural to him. ;)

Oy vey, ZXBILLY was talking about you.

You must be new here if you're just starting to believe that. And you certainly weren't at NintendoLife for the past five or so years.

The only nonsense being peddled is by the one person on the planet calling Smash Ultimate “an enhanced port”. The delusion is mind blowing. They decided to dig a hole months and months ago and rather than get out when it was shown, without doubt, that Smash for Switch was not an enhanced port of the Wii U game, they decided to keep digging but actually dig faster. (“Dig up stupid”)

As for third party support. It’s only not strong by their own personal preference of what is a third party. Remove all first party Nintendo games from the Switch library....what are you left with.....third party games. Hundred and hundreds of third party games. [UPDATE: today NoE tweeted that there are over 1000 games on Switch ] So again, delusion at its finest. Or maybe they’re just butthurt they bought a €300 paper weight while the rest of us just play games.

All the new FIFA and COD games are mere ports with that logic of his.

He's still peddling this nonsense and trying to convince everyone, even at this late stage.


How does it feel knowing that you spent $350 on a dead console?

What's your angle with even posting something like that?

I think a good idea would've been to make sure the smash bundle was never sold out.