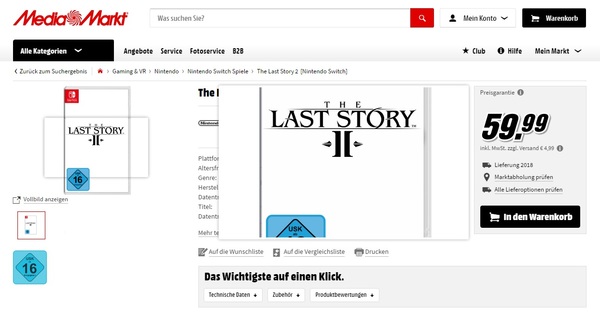 A German website by the name of Media Markt has recently posted a listing for The Last Story II for the Nintendo Switch. The boxart is just a placeholder, as nothing else about the game has been officially unveiled. As a result, this story is being marked as a rumor for the time being. If this game IS real, then it should not be long before we get official confirmation.

Bring back Hironobu Sakaguchi, Nobuo Uematsu, and Takuya Matsumoto and I'm already sold. I very much enjoyed the gameplay, music, and story in The Last Story.

Let’s be patient while mister Uematsu recovers his health, though.

I hope so. Final Fantasy has lost all of its appeal to me since Sakaguchi and Uematsu are no longer a part of it.

I dont know who that other guy is though.

Game Awards reveal? Definitely a weird game for a retailer to just pull out of nowhere!!

Hopefully the first game gets a Switch port alongside/before it if it is real!

This is the perfect kind of game for a Game Awards reveal. I'd also take a reveal of anything Eternal Darkness related.

I would give Nintendo a blank cheque for Eternal Darkness. Looooove that game.

Imagine what absurdity they could create with today's tech. Sanity effects would be limitless.

Eternal Darkness VR would be awesome

Now that would be terrifying.

Now that would be a dream come true to me!

It would be nice if this was real but a lot of time they're a mistaken listing. Media Markt are a reliable site so you never know. I seen a listing in the last couple of weeks on Amazon.com for a new Kirby game coming in 2019. That had to be an error. 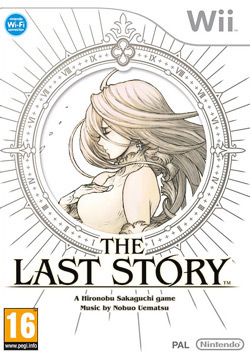 If you look at the text in the box art for this new listing, it's a carbon copy of the original.

Not unusual for retailers to use old logos for placeholders. This ones unusual since it has the stylised II but that could have always been fan made and found by the retailer for use as a placeholder but either way, whatever logo they use is never really indicative of whether something is real or not.

Funny, I`m not seeing a II in the original boxart.

I think he was implying they just stole the logo from the internet. Like this fan logo that was posted yesterday - https://www.deviantart.com/kevboard/art/The-Last-Story-2-Logo-775238445

This has gotta be a mistake. Even though would be welcome news.

How does this one ranks compared to Pandora's Tower and Xenoblade Chronicles.

It's a matter of opinion of course, but I'd say it's not as good as Xenoblade Chronicles, however, it's better than Pandora's Tower.

Xenoblade is the much better game IMO, but Xenoblade is also the best game ever made IMO, so it's pretty hard to get close to it, however The Last Story is still a very solid game, and it definitely has a solid atmosphere.

Xenoblade X is my favorite game of all time, but the original Xenoblade and Xenoblade 2 are just decent games.

I find Last Story to be way more fun than those two.

Xenoblade X is still a solid game, but I wouldn't necessarily call that the popular opinion and also Xenoblade X really isn't a Xeno game in structure, meaning, or intention, which hurts it IMO. Now you may not like Xeno games in general but that's unrelated.

What? In intention? What?

There is a great article on this but I don't have it on my at the moment, but basically, every single Xeno game, outside of X, has existed to tell a story, the same exact story in the case of Gears and Saga, and a very similar one in the case of XBC and XBC2. X only shows those themes in its sidequests and its story never reaches the messages that every other Xeno game makes. Also, those Xeno games, Gears and Saga clearly, to a large degree XBC, and to a much larger degree XBC2, were made to be story focused game first and foremost, as in that was their intention. Obviously XBC and XBC2 are still very gameplay focused, they aren't closed to as story focused as Xenosaga, but Xenoblade 1 still is very very story heavy, and Takahashi has said that XBC2 was started in reaction to criticism of the lack of story in X.

I am not at all saying I dislike X, X is still the greatest open world to date, and the skell is amazing, but it doesn't hold up to its pedigree, or as a game in general, to the same degree as the other Blade games.

Xenoblade is one the best JRPGs ever made. The Last Story has very few RPG elements, dull combat and a ton of cutscenes. I found it boring but I liked the music and the character design.

It's kinda hard to compare them. The 3 rainfall games don't really have much in common other than being Wii titles that NOA didn't want to publish even though they were already translated and it wasn't like much else was releasing those years.

(Shoutout to the Treehouse fella who got fired for going on a random podcast to defend that decision by saying that Nintendo fans weren't interested in games like Xenoblade.)

edit: I always liked this video from back when the game was still just a quirky Japan-only title: https://www.youtube.com/watch?v=-OFCpharn-w

(As a bonus the reviewer is the man who's writing Hideki Kamiya famously compared to "eating shit".)

You look at something like even Xenoblade Chronicles. People love that game, you know, within a certain group... That game is not the type of game that just pulls in enough to justify the costs on that... someone is going to have to eat the costs somewhere, because that game is guaranteed to not sell enough to justify how big that game is. You know, hundreds of hours, all voiced. That's a lot of money that goes into that.

"And people are like 'Why do you guys hate money?' We don't. That's why you literally can't make everything. And people don't like finding out that their fanbase is actually too small to justify the costs of the thing they want.

Personally if it were up to me I prolly wouldn't fire someone for saying something dumb on a podcast but then I'm also not a multi-billion dollar corporation and I wouldn't have made the dumb decision not to publish those games in the first place.

I would fire someone if they started claiming that a genuinely massive portion of my company's core fanbase is tiny and doesn't matter. Especially if they did that publicly.
Because if any RPG Nintendo has published in the past 6 years has proven, that is not the case at all. Xenoblade 2 alone has sold over a million of those 1.5 million units in the West.

Also Nintendo is a console manufacturer, they can eat those costs and then some. Exclusives are a way to get more people into your console, and market your console. No matter how niche the market, no matter how unprofitable it is, it always benefits Nintendo. That is why they are one of the most able publishers when it comes to funding larger scale single player titles. They can take a risk on games like Bayonetta.

I would fire someone if they started claiming that a genuinely massive portion of my company's core fanbase is tiny and doesn't matter.

The people running NOA at large who chose not to localise those games (even though 99% of the work had already been done by NOE) were the ones who first concluded that the genuinely massive portion of the company's core fanbase was tiny and didn't matter. They still have their jobs.

Firing a person for defending their stupid decisions seems like a case of to shoot the messenger.

Also Nintendo is a console manufacturer, they can eat those costs and then some. Exclusives are a way to get more people into your console, and market your console. No matter how niche the market, no matter how unprofitable it is, it always benefits Nintendo.


I agree that Nintendo could and should localise everything for all territories. They never have though.

As example I'm still ticked we never got the 2nd Baten Kaitos in Europe.

But I want the original in HD too. Those graphics in HD would look amazing.

Hmm usually placeholder listing have a generic font for the title of the games right? This one has the same font/style as the first game, plus the two marks near the "II".

I doubt that someone would go as far as to make a logo up for a mistaken listing. Either someone faked this, someone at this retailer is making this up and might be fired soon, or this is real.

Didn't Media Markt also put that Assassin's Creed Collection placeholder on their site? I get the feeling that Nintendo, despite the lack of noteworthy nominations, will have a big presence at the Game Awards, announcing many titles (ports galore!) for 2019.

The last story desperately need an HD remaster. That game was one of the few RPG's of the last decade that really brought something new to the table. But you could tell it struggled on the Wii. An HD remaster before part 2 would be the best thing.

Maybe it did struggle in the greater scheme of things, but at the time it turned out to be Xseed's best-selling game:

And I contributed to that success. Pre-ordered as soon as it was available. I think it would benefit greatly from being on a much more powerful system such as the Switch. There was a lot of slowdown when more than 6-8 enemies were on screen. But it didn't ruin the game. I'd still recommend it to anyone who was unfortunate enough to miss it.

Yes please, I've been wanting a follow up for years, the sheer potential that the first game oozed was quite significant, remove the rendering limitations of the Wii, and the input limitations and you could make something truly special, or about as truly special as you could get for a JRPG.

I enjoyed the first one. A lot of the first game’s issues were based on the fact that it was on the Wii, so hopefully they are able to have more freedom to take risks.

Fun fact: There was already an official sort-of-Last Story 2 made by the Gooch that established what happened to Zael and Callista and all their friends after the plot of the first game.

It was a limited event in Mistwalker's phonegame Terra Battle that popped up a couple times for a month-only each time.

There's five possible endings and notably even the best and assumably canon one closes on a cliffhanger that basically sets up their next adventure.