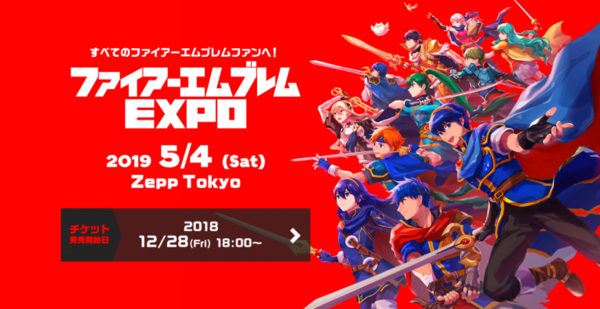 Intelligent Systems has shared the first solid details on the recently-announced Fire Emblem Expo. Nothing too crazy going on here, but it does sound like a nice event. Check out the info below.

- will be held at Zepp Tokyo in Japan on May 4th, 2019
- a “special one-night only Fire Emblem event”
- is being run by Intelligent Systems
- live concert where numerous Fire Emblem songs will be performed
- vocals will be provided by Kawamura Yumi, a popular game music singer
- Yū Kobayashi, the Japanese voice actress for Lucina, will also be there
- there will be a CD featuring the songs performed at the concert, which is planned for a Spring 2019 release
- Radiant Dawn stage drama performed by the voices of Ike, Titania, Micaiah, Sothe and Soren
- artwork exhibition featuring Thracia 776’s original artworks
- merchandise booth
- tickets go on sale December 28th, 2018 at 6 pm (Japan time)
- prices range from 8,500 to 13,000 Yen (including tax)
- show opens at 5 pm, while the stage performances begin from 6 pm

Story 2: Each Map’s Beginning – Shadow Dragon and Blade of Light

Recruitment – Genealogy of the Holy War
Comrades – The Sacred Stones
With Us! – Path of Radiance
Battle Medley
Blessing of the Eight Generals I – Blazing Blade
Applying Justice: Leidrick Battle – Thracia 776
Battle 1: Player Attack – Shadow Dragon and Blade of Light
The Devoted – Radiant Dawn
Against the Black Knight – Path of Radiance
Dark Emperor – Mystery of the Emblem