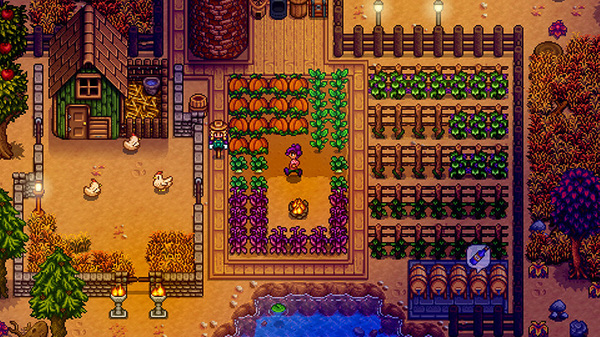 As many of you know, I’ve been working on a new game for a while. I haven’t revealed anything about it, except that it takes place in the same universe as Stardew Valley. I’ve been deliberately secretive about it because I want to be able to work on it without any pressure for the time being. I also want to make sure the concept is fully realized before revealing anything, because once it’s out there, I’m going to have to fully commit to it. I’m a pretty cautious person when it comes to this sort of thing.

Now, I believe I’ve said in the past that I wanted to devote all my time to the new game, and I might not work on any new Stardew Valley content. Well, that’s not exactly true. While there have been times in the past where I felt burnt out, and maybe even said that I wanted to move on, I always find myself coming back to Stardew Valley. For one, I keep getting new ideas for ways to improve and expand upon the game. This world is so full of potential, I could probably work on it for the rest of my life. There’s also such a wonderful community surrounding the game… and I like making you guys happy. I’m extremely grateful to all of you for supporting my work and creating this wonderful Stardew Valley community. I wouldn’t be where I am today without you. And knowing that there’s still tons of people out there who love the game and would be extremely happy to get new content motivates me to keep working.

In short, what I’m saying is that I am going to keep making new content for Stardew Valley. In fact, I’ve recently put my other game on the back-burner and have been in the process of creating a new free content update.

French, Korean, Italian, and Turkish translations are also underway, though they may not come out until early next year.

I’m aware that saying “I’m working on new content” might be aggravating to those on consoles who don’t have the 1.3 update yet… Or to those on Switch who are experiencing frame rate issues in the new patch. I also haven’t forgotten about the PS Vita users, some of whom have reported bugs to me. It’s very important to me that I make good on my promises… the idea of expanding further while there are still lingering issues and unmet promises disturbs me, and isn’t something I want to be doing.

So I want to make it clear that these issues are my top priority, and if there’s ever anything I can do to help these things happen more quickly, it takes precedence over any new content… however, I don’t do those ports myself, they are done by Sickhead Games, so there’s nothing I can personally do to have an effect on that process, beyond setting it into motion (Sickhead Games does great work, by the way… and they are making very fast progress on the console updates). I am also doing what I can to see the issues with Switch multiplayer get fixed, but that is also not something I can directly accomplish. So when I do work on new content, it’s only when I have no current avenue for addressing these higher priority issues.

So, currently I’m working on a new Stardew Valley update, and my new game is on hold for the time being. The difficult thing is that I want to work on both… I want to keep working on Stardew Valley and I also want to work on my new game. But I don’t have enough time to accomplish my goals with both things simultaneously. For a while, I considered being finished with Stardew Valley altogether. But that would make me (and many others) sad. So I’ve decided that I’m going to form a team to help me work on future Stardew Valley content. The update I’m working on right now (1.4) will be another solo update, but after that I hope to have a team in place that I can work closely with on future content.

This is going to be a big change for me… I’ve always worked alone, and working with a team is a whole new ballgame. However, just as I did with Stardew Valley originally, I’m just gonna go for it, and have faith that I can rise to the occasion and make it work. My hope is that the new team will help take some of the workload off me, so I have enough breathing room to divide my time between my new game and Stardew Valley. I still plan on having a very active role in the future of Stardew Valley, and the originator of all major Stardew Valley decisions and content. And there are many aspects of development which I’ll never be okay with handing over to another, like music or writing. But when it comes to programming, fixing bugs, administrative/business work, or even pixel art… I think I’d be okay with having some help. I’ll post more about this later.

This is a lot of new info, so here’s a summary:

My top priority is to see the 1.3 multiplayer update come to Xbox One & Playstation 4, and for issues with the Switch patch to be addressed.
I am working on a new game, but I’ve put it on hold in order to create a new Stardew Valley update (1.4).
French, Korean, Italian, and Turkish translations are in the works, though they may not come out until early next year.
I plan on forming a team to help me work on new Stardew Valley content (beyond 1.4)
Once the team is in place, I’ll divide my time between Stardew Valley and my new game.
I am now self-publishing on all platforms except Nintendo Switch and mobile.

I wonder how guys like ConcernedApe actually have a life... How in the world is it possible to handle alone a so complete and complex game?!
Kudos to him!!

I still want my psychical copy for the switch.