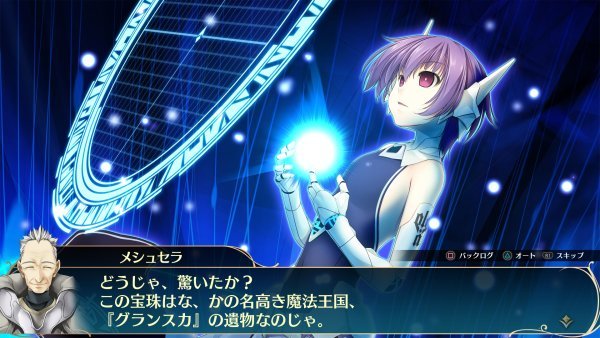 A new wave of details on Wizard's Symphony has come in. Check out info on dungeon exploration, quests, and character growth/evolution below.

There are numerous ruins and dungeons in the vicinity of the trade city Kazan. Although they are inhabited by dangerous monsters, you can obtain “Remnants” of ancient artifacts and the materials necessary to forge them by exploring.

Characters will sometimes start conversations while you are exploring a dungeon. This system is called “Dungeon Talk” and will include a great variety of topics that liven up the adventure, including hobbies, tastes, arguments, and even certain characters’ secrets. Characters will react in various ways depending on your progress in the story and dungeon.

“Automatic Movement” is a handy feature for moving to places you have already been in a dungeon. It quickly and automatically moves the player to the intended destination via the fastest route.

There are also “Safe Areas” on each dungeon floor, where you can save your game, teleport to other floors’ Safe Areas, or return to Kazan.

There are three types of quests:

Through Skill Customization, you can spend skill points earned through leveling up and other means to acquire unique new skills for each character. Which skills you acquire or strengthen is up to you. You can also mix and match certain skills to try to create synergy between characters.

Remnants are ancient artifacts that lie in wait in dungeons that can be equipped to Remnant Slots on weapons and armor, which exhibit effects such as increasing stats, resistance, and more. Remnants can be obtained from dungeon treasure chests, monster drops, or through Remnant Forging.

You can acquire new Remnants through Remnant Forging at Yildiz’ Magical Shop. When forging, random effects will be given to the Remnant, and its effect will change based on your Forge Rank.

You can strengthen your weapons and armor to increase their stats by using materials obtained in the dungeon at the Blacksmith Sunbel shop. Additionally, when you strengthen a weapon or armor to a certain level, its number of Remnant Slots will increase.