Creatures Inc. finds themselves in hot water after shrine visit 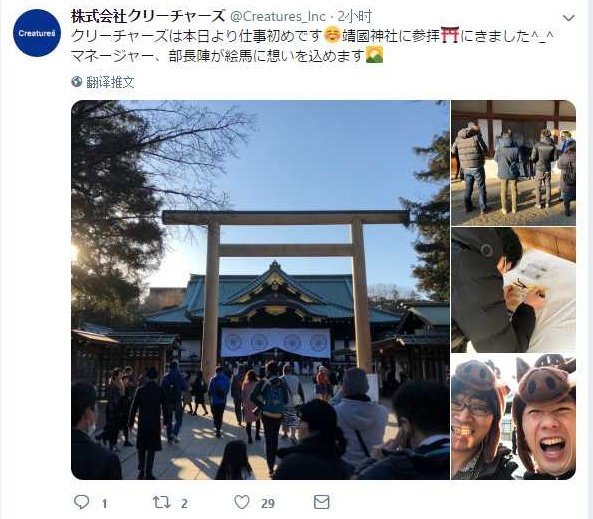 Creatures Inc. is currently receiving a ton of backlash from Chinese and Korean fans after two employees made a visit to Yasukuni Shrine. The photos show the two employees visiting the shrine and smiling in the pictures. For those who don't know, Yasukuni shrine has courted a number of controversies over the years, as 14 war criminals are buried there, alongside thousands of others who died in World War II.

These pictures were actually tweeted out by Creatures Inc., but quickly removed when negative responses started to come in. While we're not quite sure why, Creatures Inc. has not yet offered an apology for posting the pics, or an explanation of what actually happened.

I can’t read Japanese but unless they posted something like “war criminal-san was a hero!”this seems like such a nothingburger.

There are thousands of others buried there right?

I can’t read Japanese but unless they posted something like “war criminal-san was a hero!”this seems like such a nothingburger.

There are thousands of others buried there right?

Yeah, it's a custom to visit a shrine on the New Year and Yasukuni is one of the closest shrines to Creatures's headquarters.

Many may see this as non-news or think people are over reacting, but remember that Japan invaded and extorted Korea and China for many years before ww2.
And that shrine has become the spot to admire those war criminals and soldiers invading the lands, literally treating them as gods.

To put in context that would be more familiar to American, think of this as
"Jewish people getting mad at Hitler admirer"

But they're not admiring the war criminals. They were simply visiting the shrine (probably for New Year's). They had no ill intentions at all. I mean, are you saying they're supposed to go to a different shrine simply because of the people that happen to be buried at this one? Talk about egg shells...

I don't think there was ill intention either, just being ignorant or dumb.
War criminals being buried there is not like just being buried in a regular cemetery, it is seen as they were admired as gods in that shrine(google shinto for more info). So yes, I am saying no one should go to that shrine or at least don't go posting that.

But that's just being rather odd. If the shrine isn't meant to be entered, then they would just not enter it.

People may as well bash at them for having their headquarters near the shrine.

So you are saying it's ok to worship war criminal since that's the closest religion? How would you feel if people pay tribute and respect to someone who killed your family?
sure, visiting a shrine on new year's is just a custom and it's not about admiring them. But unfortunately, that's what that shrine stands for. Knowingly or not, it's not a good move especially for such global company like Creatures.