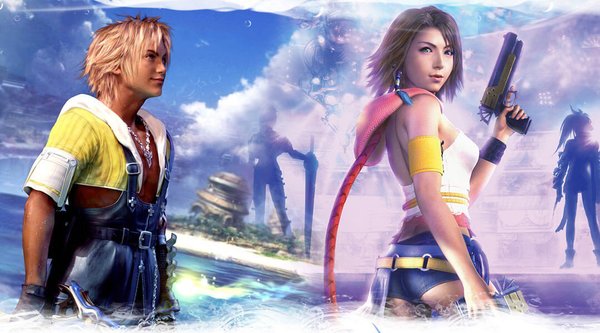 Earlier this week, fans noticed that Square-Enix Europe's listing for the retail release of Final Fantasy X / X-2 HD Remaster said that just Final Fantasy X would be on a game card, as Final Fantasy X-2 would be included as a download code. While that still appears to be the case in Europe, the situation is better in Southeast Asia.

If importing is the only way I get both games on one cart, I'll import it.

The way this game is being handled in Europe is a disgrace. It goes to show that it is possible to put it all on one cartridge but Square Enix have cheaped out. I was going to suggest all the different languages in Europe might be a factor......... eh, no, stop, it's Square Enix being cheap.

I'll be tempted to import.. providing the Southeast Asian version will have full English support. Otherwise, I'll have to hunt down a PS3 copy. Would have bought Switch version day 1, if both games were on a cart.

Please can everyone abstain from buying a copy of this game from south-east Asia region. We don't want our peeps in that part of the world to lose this privilege like our friends in South Africa now having to cough up a 20+% increase on their eshop games.

If importing is the only way I get both games on one cart, I'll import it.

I did the same thing with Okami. It was relatively easy to import. Hope it doesn't need to happen but I hope you get your wish if it does.

I will be doing that with Okami and Bayoneta 1-2 fancy edition. I mean, come on! If they are such assholes with us we should be allowed to get quality products somehow else..

I jumped right on that. Thanks heavens for play-asia as the Asia version is multi-language. I pre-ordered 2 of em

Play Asia is awesomeness in so many ways! =)

In that case Nintendo was losing profits because of it. In this case, if anything, they'll see that people want them on one cartridge.

I'm.not too sure about that..I've got multiple accounts on my PSN and XBOX taking advantage of pricings from regions and Sony or MS haven't thought it necessary to "adjust pricing".

They're different companies, with very different ways of running their business.

True. But they're all in it for the money. More so Sony and Microsoft who haven't really for that passion for the trade like Nintendo do.

Most people don't seem to understand that especially when it comes to online preferences.

Wait, Bandai Namco are handling these games in Southeast Asia? I mean, I get that some of Square Enix's characters made guest appearances in some of Bandai Namco's fighting games, but this is just odd, even with that idea in mind. And if this news is any indication, the question becomes, "How or why is one branch of Bandai Namco doing publishing duties of a game/games from Square Enix, let alone doing it more admirably than one of Square Enix's own branches?"

If these come with Japanese audio and English text, I'll be all over this release.

The issue must be with cartridge pricing.

Has any developer used the larger cartridges yet?

Squeenix did with one game. Dragon Quest something. But I think that's the only game that uses it so far.

I assume it could be Dragon Quest XI S.

It was Dragon Quest Heroes 1&2 and it was at launch. It could have been part of an experiment that Nintendo co-founded.

Yeah. Thanks. We don't know the reason, but it sure should have been a trend.

Let's hope that Square Enix America squashes that rumor once and for all. Either way, I'm STILL buying Final Fantasy X and X-2 HD Remaster.