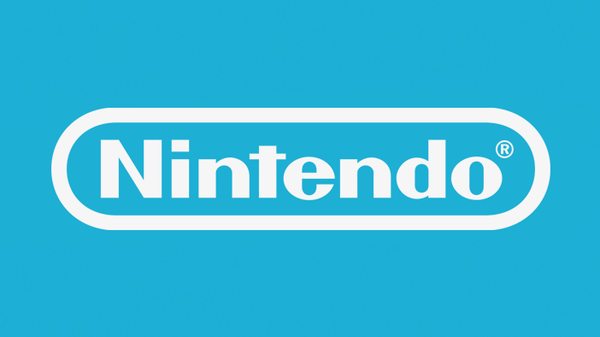 Here it is, boys and girls. All the third quarter sales data from Nintendo you could want. Tomorrow night will be the usual investor Q&A, plus the presentation. For now though, let's pour through all the data on just how well Nintendo did! 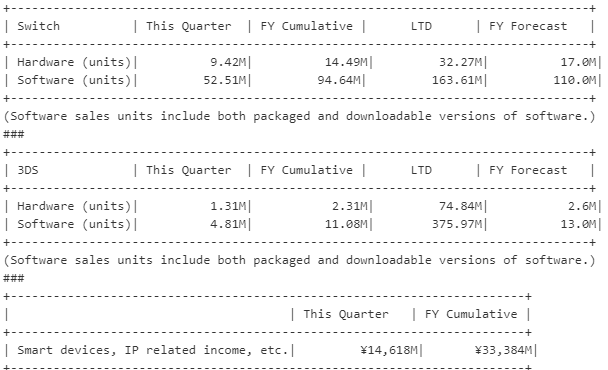 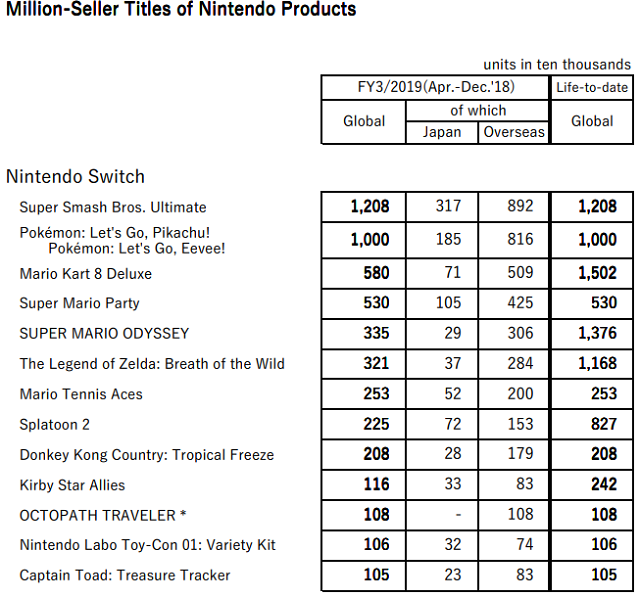 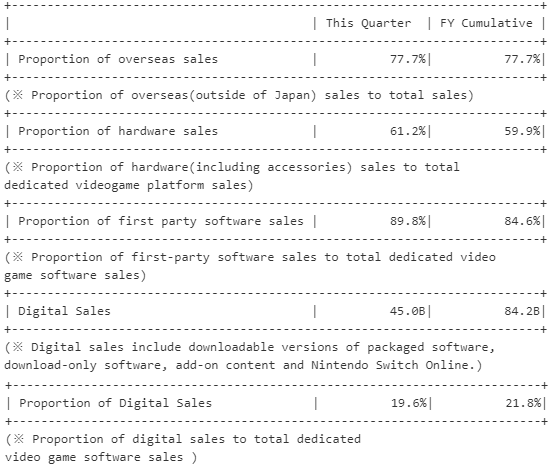 - total number of million-seller titles during this quarter was 20, including the titles of other software publishers
- 8 of those 20 million sellers came from third parties
- Switch saw a 19.5% increase in sales year-on-year
- Switch saw a 100.9% increase in software sales year-on-year
- 3DS saw a 60.5% decrease year-on-year basis
- 3DS saw a 64.5% decrease in software sales year-on-year
- NES Classic Edition and Super NES Classic Edition recorded total sales of 5.83 million units during the quarter
- Switch digital sales saw a 95.1% increase year-on-year
- mobile revenue saw a 14.7% increase year-on-year basis
- Nintendo plans to broaden Switch's user base by adding new titles and strengthening sales of popular titles already released
- For 3DS, Nintendo will continue to leverage the platform's rich software library and its hardware install base
- with mobile, Nintendo will focus on continued service operations for applications that have already been released
- Nintendo lowered Switch sales expectations for the fiscal year to 17 million
- Nintendo has increased its full fiscal year Switch software forecast from 100 million to 110 million
- 3DS sales expectations for the fiscal year are 2.6 million
- Smash Bros. Ultimate is Nintendo's fastest-selling home console title ever, sitting at 12.08 million sold
- Super Mario Odyssey sold 13.73 million units, making it the best-selling 3D Mario title by over a million
- Mario Kart 8 Deluxe is the best-selling Switch game worldwide
- Octopath Traveler shipped 1.08 million in the West, and at least 1.27 million worldwide
- Splatoon 2 is Japan's best-selling Switch game, sitting at 3.33 million
- mobile revenue accounted for just 2% of Nintendo's total, while 3DS accounted for 4%
- the holiday 2018 quarter was the best quarter for Nintendo (in terms of revenue/profit) since holiday 2009
- when adding in the last known total for Zelda: Breath of the Wild on Wii U, the game has sold 13.18 million units between Switch/Wii U 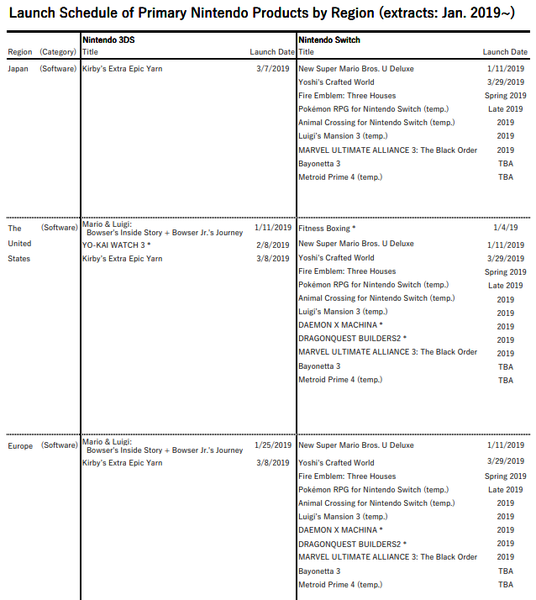 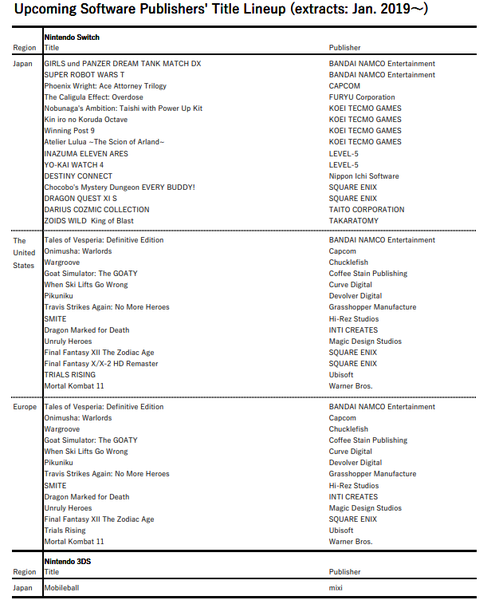 - 8 of those 20 million sellers came from third parties
This is the biggest bit to me.
Pretty good compared to last year, though FE Mario Rabbids and Pokken all use Nintendo IP and count there.
Even still 5/20 is still growth. Once we get DQ, Yokai Watch, a new SE Bravely team game, possibly a new Mon Hun, and more, that number should grow.

They're actually counting indies. So probably Minecraft (not indie), Rocket League, and Overcooked 2 could be some?

14.49/20 million switch units sold this fiscal year. Don't see them hitting 20 million, but still a respectable year two. I feel like it could have been higher if the first 3/4 of the year had bigger titles along the lines of Smash and Pokemon.

they lowered their forecast to 17 million

So they need to sell 5 million Switch's this quarter to reach the 20 million target? Interesting that they've dropped their forecast to 17 million for the forthcoming year. It's not a good sign that Bayonetta 3's release date remains "TBA", Doesn't seem like it's coming this year. Nintendo are in a healthy state.

It seemed like they dropped the forecast for this fiscal year, not the next one... If so, Nintendo shares are sure to take a dive as well... Bayo3 was a looong shot for this year anyway [still disappointed about the Metroid 4 delay, though]

Some good news is Octopath did indeed hit that 1M mark [shipped], as did Labo which should come as a surprise to just about everybody. Also, 3rd party seems to be doing better, having 8 million sellers out of the 20

Given that Nintendo slashed the sales forecast for 3DS, my guess is they will be ceasing production in the near future.

I should also point out that the Switch came pretty close to surpassing lifetime sales of the N64, 32.27 million versus 32.93 million. That'll be one of the headlines next quarter.

9'42m this quarter and 5,07m for the rest of the year, they could had the 20m if they had released games others than smash and pokemon.I think they thought labo would have sold a lot of switch. I really wonder what the numbers will be for the rest of the fiscal year because they're only new super mario u and yoshi for this quarter.

Yoshi comes out at the end of the quarter too. You'd think Nintendo would have understood the value of having strong releases year round when comparing the Switch's first and second years, keeping in mind that in the first year Nintendo struggled to meet demand, but that doesn't appear to be the case considering the weak lineup the Switch has for the first quarter, hopefully not half, and hopefully not 3/4 of the year.

It's right yoshi is end of march it won't impact the quarter, so for this quarter there's no more 1st party games ...... Nintendo really need to do something if they don't want to lose their momentum, the last 'new' 1st party game I've bought was hyrule warriors definitive edition, and I've downloaded torna has I had the season pass (and i loved it). If you're not a smash or pokemon player the last 1st party was months ago.

Hey, 3rd parties!!!! It's very nice you port older games and also very nice to see the new DOOM and MK11 releasing (almost) alongside the other versions. But since the Switch is a hybrid and thus doesn't have the same specs as the other platforms, I suggest you make some original games for the system. It looks like it worked out for Squeenix with Octopath, eh (a game that was robbed from awards it should have gotten)? Oh and why the HEll isn't GTA5 on Switch by now? We all kow that the people in the UK would get at least ten copies each

Nintendo: Seriously now. You could have reached that 20 mill goal if you had at least one big hitter for the beginning of the year. Maybe not a very big title, but for how long has Pikmin4 been in development for example? Ok, you have leared from mistakes with the Switch (specially after the Wii U) but time to learn some more. MS did with the XO, so so can you. And do something with that online "service" of yours, OK?

Smash Sales are amazing. But then again the game deserves it. Sakurai and co went all in on that one.

On a final note, before I let the cat back in, it's truly an odd satisfaction to see Bayonetta 3 as a Nintendo product. I believe PG that the game is well in development (it's about two years from what I gather) and hope we get to see more soon =)

Have a nice day, everyone!

8 of those 20 million sellers came from third parties

And yet there's no mention of them except octopath traveler.

seriously though, kudos to SMO. Hopefully the next game can be as memorable and as fun as SMO.

Hmmmm Octopath is a million seller? Right here in blacks and white (again). But we were told by a troll that that simply couldn’t be the case!!

Yep surely they can't be allowed to lie on their financial reports? That would be fraud.

Those Smash Sales are insane to me! Especially because they are above Pokemon, but I guess they are more of a remake than a new entry into the series.