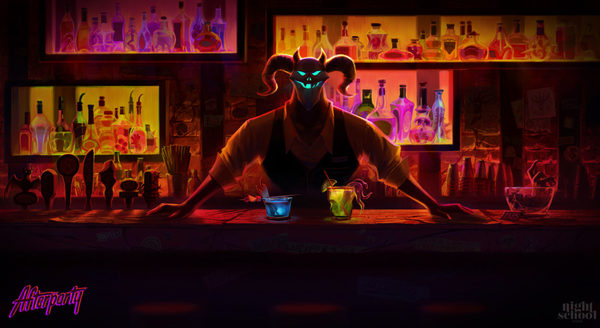 We've got two more panels to look forward to at GDC 2019. Oxenfree dev Night School Studio is going to host a panel talking about their upcoming game Afterparty, while Funktronic Labs will be talking about Killer Queen Black's base for inspiration, Killer Queen. Check out full details on each panel below.

The Art of 'Afterparty': The Devil's in the Details

Night School Studio's Art Director Ruel Pascual discusses how the visual style and development of 'Afterparty' was born from a variety of new production variables. Building a follow-up game to 'Oxenfree', filled with more characters, environments, and a higher narrative and design complexity, ushered in a host of art challenges. Ruel will unravel the process of building Afterparty's pipeline for art, including modeling, rigging, and animation. Featuring concept art designs, environment assembly, lighting techniques, and scene direction.

Attendees will learn about the workflows in making the follow-up game to 'Oxenfree', which introduced a new set of production complexity and challenges. Ruel will detail the tools and techniques that the production team at Night School developed to accomplish the complex visual style of 'Afterparty'.

This session is intended for visual artists working on independent games. Attendees should be familiar with game development pipeline from art, animation, and game design. They should have knowledge of art and animation software and real-time engines.

How 'Killer Queen' Built an Esports Scene on an Indie Budget

'Killer Queen Arcade' is a competitive indie arcade game that has managed to create an esports community around a 5 on 5 arcade game...in 2018! From community-led monthly regional tournaments to the annual National BumbleBash Tournament, Killer Queen has created a phenomenon through a lot of hard work, clever design, and ground level efforts to build local communities. Learn about how 'Killer Queen' managed to create a national esport without having to spend like a AAA gaming studio.

Learn about how KQ approaches building community by aggressively engaging with its community and enabling its core fans to express themselves in the community. From community outreach and participation, to how merchandise is handled, to even game design and system features, a variety of different aspects of KQ have had successful and not so successful effects to foster a competitive national scene for an indie game.

Hey this is Alan, the guy doing the GDC talk on building esport communities...for the record, it's not for killer queen black, but about killer queen arcade, the original game. Please update the article when you can, thanks!

...oh and also i'm not doing this as my current job at Funktronic Labs, but independently based on my previous experience at Bumblebear Games.