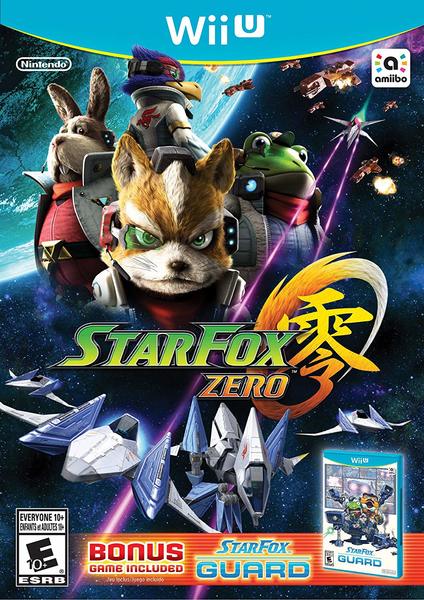 If you still have a Wii U and you're looking for an insane deal, you might want to check out Five Below. Reader iiJcMii sent in photographic evidence of multiple StarFox Zero + StarFox Guard bundles in-store. That means you can scoop up the bundle for just $5, which is an insane deal!

So want this remade for Switch and those awful dual-screen motion controls removed!! Waited ages for a Starfox game then it was practically unplayable.

At that point it'll be a different game. In good faith that game was built with the purpose of showcasing the gamepad. When you play in coop and just use the arwing and single blaster, you can see that motion aiming and dual screen is needed for several sections.

Now THAT'S a price this game is worth...

Sad, but a great deal

No, what's sad is that Nintendo still charges $50 for this on the eShop. The Wii U is dead, I'm sure most people have packed theirs up or handed it down to a younger sibling, so it'd be great if Nintendo started adjusting their games' pricing (especially on games like this, which basically flopped on day one).

Nintendo games have had their prices lowered with badly received games. Other M also has had bargain prices before. I perceive as self defeating putting effort to reduce prices on a console they no longer support, because even if it's a commodity they don't gain anything from doing that. I suppose.

I do see however, that physical items of that console, could likely get cheaper as several games from that console are ported to the Switch.

There wouldn't be a point to updating the game's price on the Wii U eshop because they have moved on from the Wii U.

I mean, even the 3DS discounts are absent from this point on.

I think they should drop more because why would anyone pay $50-$60 for this (or other games that flopped like Paper Mario: Color Splash) when you could just buy a pre-owned physical version for much cheaper? Nintendo won't see any of the money from a used copy but they'll see 100% of the money from an eShop purchase.

Obviously I wouldn't expect them to drop the eShop version of this game to $5 just because one store is selling it for that price, but $50 is too much (and if I remember correctly the $50 version doesn't even come with the Star Fox Guard half of the game, it's an extra $10 for that).

Wow, I remember picking this up with Color Splash for 50 bucks and thought I was getting a great deal.

Me too. But hey, I did like it in the end. So no shame. I do boot it from time to time, although it did come a bit short and with some rushed stages.

I didn't much like Star Fox Zero, but $5? Anyone on the fence about it should give it a shot at that price.

I'm sure I could find a $5 game on the eShop that I'd have a lot more fun with.

While Star Fox Zero was an ok game at best, Star Fox Guard is pretty great at $5

Man...I wish I got the Wii U and this. Just for the curiosity of how this game turned out in the end.