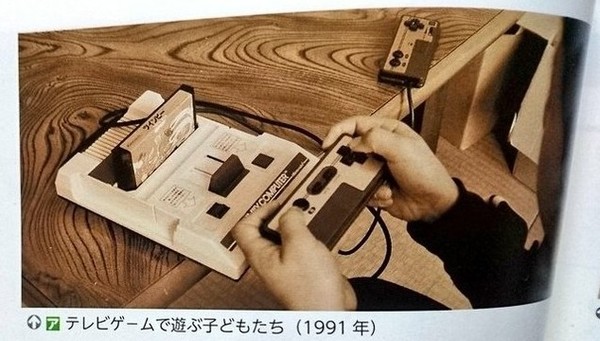 Notice anything wrong in the image above? This picture appears in a supplementary reading book for elementary school children in Japan. The picture recently went viral with Japanese social media users, as they couldn't believe such an obvious mistake was made. For those who haven't noticed, the kid holding the controller in the image above is holding it upside-down!

Believe it or not, the picture got so much attention that the Board of Education in Iwate prefecture commented on the image. They say the child was asked to hold the controller to show what children used to play back in 1991. As the child was unfamiliar with the Famicom, he held the controller the wrong way. The board said that more preparation and research should have been done in order to avoid the mistake.

As to why no one else involved with the making of this book, including the board themselves, never caught this mistake before it got printed...no reason was given!

Maybe the kid played on the first gen classic controllers for Wii and got used to the awkward cable position?

The first thing -I- noticed was the Famicom not being connected to TV and power.

I find the explanation a bit difficult to believe, given that every console since has put the directional control options (D-pad or stick) on the left.

I do wonder if left-handed people have tried playing with an inverted d-pad and button placement.