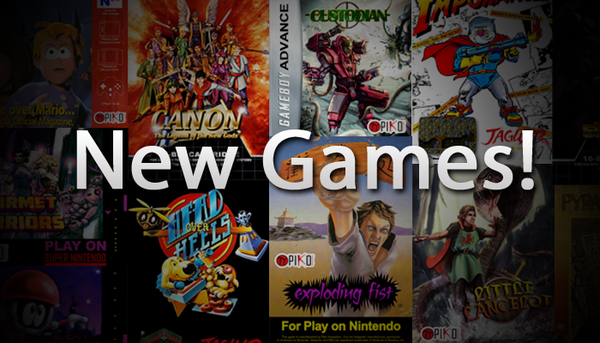 40 Winks for the Nintendo 64 is a 3D action adventure not unlike Nintendo’s Super Mario 64, pitting your character of choice against nightmares and the whole of the dream world.

Gourmet Squad for the Super Nintendo takes the scrolling brawler genre into the future in a title that was originally a Japan exclusive that was produced in very few quantities.

Tinhead for the Super Nintendo is 2D side scrolling action platform title for the Super NES that will take gamers on an intergalactic ride across 24 levels.

Little Lancelot for NES was originally a PAL region, Europe, originally released by Ocean Software for the Nintendo NES, that features various combat, action platforming, and many enemies to conquer on your quest.

Pyramids of Ra for the Nintendo NES was originally known as Scarabeus, now released under its original name with enhancements that improve upon the original. Gameplay requires planning ahead and problem solving skills.

Exploding Fist for the Nintendo NES, this title brings an unreleased title to production after being completed by Piko Interactive programmers. Compete in bouts taking your character from novice to the Tenth Dan. The game is a port of the Commodore 64 classic "The Way of the Exploding Fist"

The Atari Jaguar is receiving two new games, first Impossamole which is an action adventure originally released by Gremling Graphics, featuring many levels and enemies to defeat.

Head Over Heels is the other new Atari Jaguar title, this game is a puzzle action game originally released by Ocean Software that will require long term thinking and memory skills to complete.

Canon - Legends of the New Gods is a turn based strategy role-playing games that originally saw release only in Taiwan. Now English fans can play this title which features over 30 hours of gameplay in an ancient eastern mythology entrenched story on their Sega Genesis or Mega Drive.

Switchblade brings a classic Commodore Amiga title, originally developed by Core Design and published by Gremlin Graphics, to the Sega Genesis or Mega Drive for the first time on a region free cartridge. Your quest will take place across many sprawling levels of fighting and problem solving situations to face.

Thunderbolt II, also for the Sega Genesis or Mega Drive, is again a former Taiwan exclusive release. The action is set in an overhead scrolling shooting style with enemies often filling the screen.

Finally, Custodian for the Nintendo Game Boy Advance is a 2D side scrolling action game pitting gamers against parasites that live to drain the energy bases. Featuring four levels and many weapons and power ups, Custodian is not like anything fans have played before.

I'm in for Exploding Fist!