Mechstermination Force dev is 'excited and terrified' for the game's launch, worries about Cuphead as competition 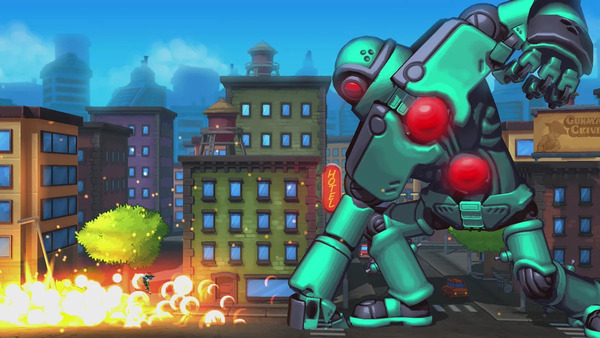 Bertil Hörberg, the creator of Gunman Clive, revealed Mechstermination Force for Switch not that long ago. The game is a collection of boss battles against giant mechs. In an interview with Dtoid, Hörberg shared his apprehension about releasing the game.

"I'm excited and terrified of the launch. We'll see what happens basically and I have to admit, it's not the perfect timing with Cuphead being announced. They're not the same game, but they are similar and being released so close together is not ideal."

It's true that boss battles are a key mechanic in both titles, and Cuphead certainly looms large above other games releasing on the Switch. That said, I think Mechstermination Force looks different enough to attract an audience. I know I'll be hopping on it as soon as it launches!

I remember this guy tried to make a top-down like zeda game just to fill the void nintendo left after the jump to 3D on handhelds, but then nintendo announced A Link Between Worlds, and he cancelled the game, now a similar situation is happening...poor guy....i might wait for cuphead on physical first before getting in on switch so i might tried this game

I’m really stoked for both.

He usually releases his games for super cheap, you can get both!

I understand the fear but the shop isn't exactly swimming with boss-rush run-n-guns and Cuphead's been out on other stuff for a while. I don't think there'll be too many people who were interested in MF who decide to skip it 'cuz of Cuphead.

(If one of the forthcoming Konami collections has the Megadrive version of Probotector then I'd be worried.)

Can a cup beat a robot?