Miyamoto and Aonuma were key in making Cadence of Hyrule happen

Both big fans of Crypt of the Necrodancer
31 March, 2019 by rawmeatcowboy | Comments: 13 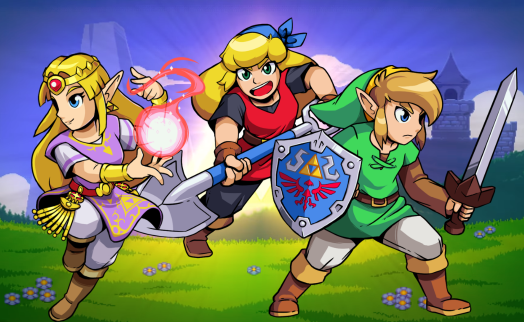 One of the biggest surprises in Nintendo's recent Switch Nindies Showcase was the reveal of Cadence of Hyrule, a Legend of Zelda x Crypt of the Necrodancer mash-up that has Nintendo collaborating with indie developer Brace Yourself. Many are still wondering about how this collab came together. Turns out it all started with two of Nintendo's biggest names.

Believe it or not Shigeru Miyamoto and Eiji Aonuma were big fans of Crypt of the Necrodancer on Switch. Apparently the two played the game constantly, and considered themselves to be quite the fans. After becoming so enthralled with the game, both wanted to learn more about the team that put it together. That desire to learn more about the team is what paved the way for the collaboration!

These developers are living the dream right now.

These developers are living the dream right now.

Crypt of the Necrodancer is indeed a fun little game.
A great part is the battery consumption: it drained my Switch only 25% after 2+ hours playing! :-)

It's nice to know the Nintendo bigwigs get exposed to some random little indie games on the Switch. Necrodancer is one I hadn't even heard of.

Agreed. I hope this is just the start of collaborations. I was going to get the original Necrodancer but I'm gonna wait for Cadence.

I'd recommend getting it on sale at least. It really is a fun game and definitely worth your time.

So Shin'en making F-Zero when?

I still have to check out Necrodancer. The name is enough for me to be curious really.

But as GLOOP mentioned, these guys must be living a gamer's dream and should be pretty darn honoured =) I know I would be.

Shin'en developing F-Zero would be awesome.

They sure have the know-how, but they are very small team, so they would have to get more work force I guess. But I would loe it if Nintendo greenlit it. They deserve i. And such loyal Nintendo fans also.

I really don’t think we’re going to start seeing indies making straight Nintendo games, as cool as some of those would be. I think Cadence of Hyrule is the kind of thing we’ll be seeing more of, as in taking indie games that already exist and fitting Nintendo properties around them. Like, I dunno, taking something like Battle Chef Brigade and making a new game but with Kirby as the star and set in his universe. Something that makes sense when mashed up with a Nintendo property but keeps a lot of the same core gameplay as the original indie game.

I’d love to be wrong though and see Nintendo giving some of their forgotten IPs to indies, like F-Zero as you said!

I never said I thnk it will happen, but I like the idea. Specially with games like F-Zero which obviously isn't Nintendo's priority these days and Shin'en would be the perfect team to have a go at it. A lot is changing at the big N, but....

Heard a rumour once that Platinum was making an F-Zer game. Now that would be.... Intriguing .

While this is a good thing, I hope that Nintendo doesn't let Indies develop the main games.

Necrodancer is a roguelike and roguelike is so far away from typical nintendo design. It's like anti-nintendo to the core. Nintendo are masters of tight level design, directing the players, sending messages through level design, clockwork precision levels of world building and stuff like that. That's why it took them so long to tackle open-world game design, which already was pretty far away from their philosophy, but I absolutely can't imagine them doing rogue elements. So it is great that this collaboration exists as it's going to give us a game that nintendo would never do anyway.

But Miyamoto is a detriment to the industry y'see