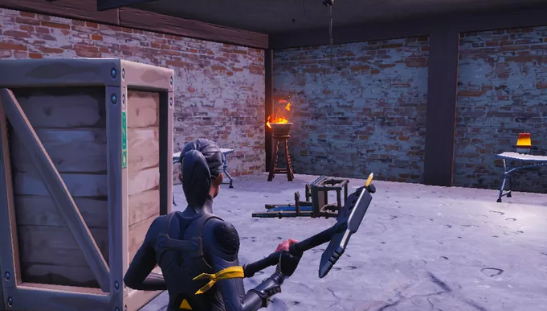 Fortnite player FuryLeaks recently had his map creation featured in The Block, a section of Fortnite where user-created maps are put on display. FuryLeaks' creation was called Mysterious Mansion, which was a spooky mansion with various creepy scenes throughout.

The version of the map added to the game featured the scene above, which shows a rope dangling from the ceiling, as well as a chair that's been tipped over. In the video tour of the map by FuryLeaks, we actually see someone hanging from the rope.

Short tour on my The block map for next week pic.twitter.com/KaEqpBnttJ

When this scene was brought to Epic's attention, they promptly removed the scene from The Block and replaced it with a previous fan creation. While Epic hasn't offered up a public statement on the removal, FuryLeaks claims Epic left him the following response.

We had to take your Block down, we didn't catch the scene that depicted suicide, and that's something we can't allow on The Block or to be featured by Epic. Please keep this in mind for future work.

You literally kill your friends and do a dance over their dead bodies in the game.

Someone should get banned from doing something so stupid like that! I’m glad that it was removed and no one should see that!

You literally kill your friends and do a dance over their dead bodies in the game.

It's designed like a high tech laser tag game tho. Theres no blood and your body gets derezzed to safety after losing hp and shields. Everything is meticulously designed to make this
game acceptable to be played in any setting and age group.

Theres a difference between losing death and horrific death