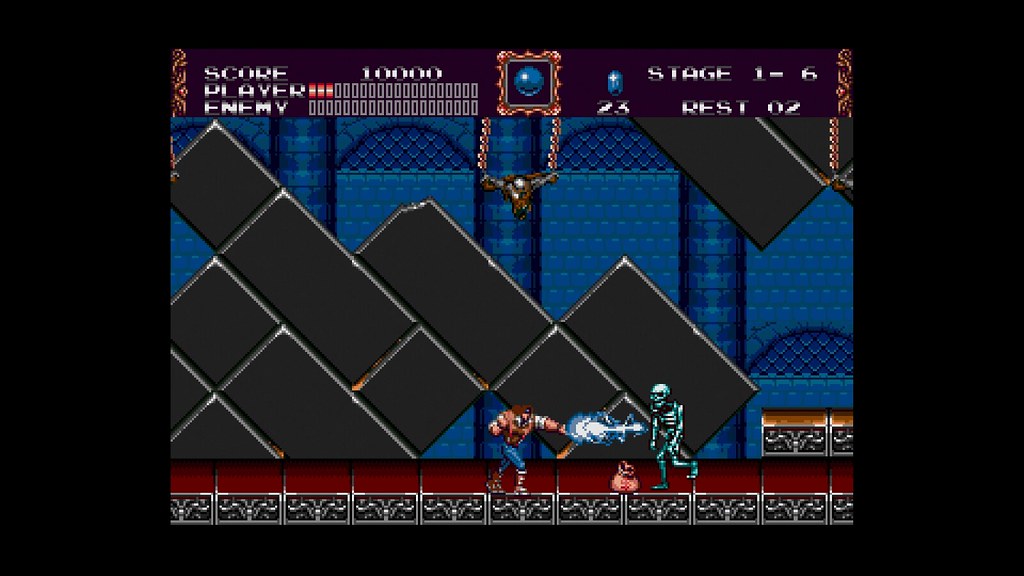 The follow-up to Castlevania, Castlevania: II Simon’s Quest displayed the evolution of the franchise by including RPG elements encouraging world exploration throughout Transylvania. The franchise continued through the 1990s with Castlevania Bloodlines, known for its faster pace and powered-up weapons, departing from the main Belmont clan following blood relative John Morris.

Castlevania The Adventure, released in 1989, was the first game in the franchise made for handheld devices introducing inventive gameplay mechanics for players to explore the world of Transylvania as Christopher Belmont.

Previously unreleased outside of Japan, the Castlevania Anniversary Collection will also include Kid Dracula. Released as Boku Dracula-kun in 1990, Kid Dracula is a cute and quirky spin-off of the Castlevania franchise and is the first official English version of the game to appear from the Nintendo Entertainment System.

The Castlevania Anniversary Collection is part of KONAMI’s 50th anniversary celebration and compiles titles from its beloved franchises and retro games. To bring the Castlevania Anniversary Collection to life, KONAMI partnered with game developer M2 to expertly adapt these classics for modern gaming systems. Packaged together with Bonus Book extras including an interview with Adi Shankar, one of the producers of the animated series, this digital exclusive collection provides an entertaining and comprehensive history of Castlevania’s beginnings.

The Game Boy game (sadly). I thought for sure they'd include the Rebirth game. Huge wasted opportunity IMO (unless they're holding it back as potential DLC).

Yeah, including Rebirth should have been a no-brainer. This collection is also missing the PS and GBA games. Not sure If the DS games can be ported without damaging the gameplay due to its 2 screen play.

Ouch. I was really hoping for a bunch of these and Symphony of the Night. I guess that leaves room for a sequel down the line. It's too early to talk about a second collection, but I hope Konami will at least tell us that more collections will come in the next year or so.

Umm...wow. Bloodlines is amazing, but including Adventure over Adventure ReBirth is beyond ridiculous. That game is something awful.

Kid Dracula is based off the NES version which I've never seen before. I don't know if it's good or not but I hear it is.

Dreadful. But then I expected as much from Konami. Some of these are ancient and not worth playing. I had hoped they put the likes of the GBA Castlevania games in this.

They literally said it would cover the origins of the series so expecting any of the metroidvania titles was silly. Seems to cover the pre-rondo era specifically so I assume the next collection will have Chronicles, Rondo/DX, Legends, SOTN and the GBA games..

so no rebirth no gba/ds game ? it probably means no rebirth no contra 4 for the contra collection. :/
there's a second castlevania collection at least ... to crush our hopes one more time lol

I'm glad they are finally acknowledging Castlevania, but I'll be waiting for a collection of the GBA/DS games.

Only two questionable choices to me are Simon's Quest and the first Game Boy game. Simon's Quest has some pretty questionable design decisions that make me feel like the game was made in order to sell guide books back in the 80s, and the GB version of Adventure is slow as feck. Like someone else said above, real missed opportunity to not include the much better Rebirth remake since now you can no longer buy it on Wii.

The rest of the collection is really good though even if I would have liked to have seen Rondo and Symphony as well. Bloodlines has strangely never gotten a modern re-release until this very year via both this and the upcoming Sega Genesis Mini (yeah it never even got a Virtual Console release despite most of the other CV games coming out on VC) so that alone already makes me want the collection, and I hear Kid Dracula is a really fun spin-off.