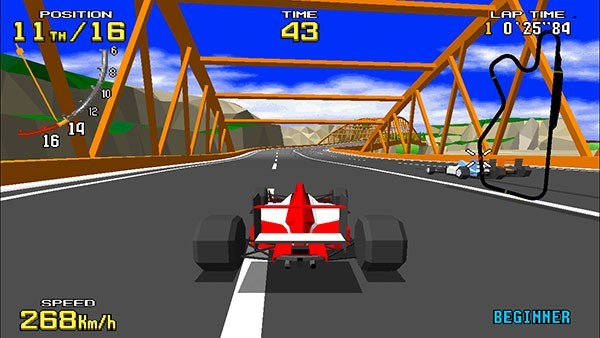 Control a 3D formula car, choose from one of three course types, and race in four-to-five lap races with the goal of first place. Additionally, you can switch between four different perspectives during gameplay, from the driver’s view to bird’s-eye view.

The First Faithful Reproduction of the Arcade Version

The Sega Ages version of Virtua Racing is the first faithful reproduction of the arcade version. The “Normal Race” and “Grand Prix Race” settings made possible by the arcade circuit board settings can both be configured in the settings. While Normal Race has four-to-five laps, Grand Prix Race is an endurance run of 20 laps. Since your tires wear as you drive, which affects your handling, it is important to determine when to make a pit stop to change your tires in a Grand Prix Race.

Additionally, there are two competitive modes. The first is a two-player online multiplayer race mode. The second is an offline race mode that uses a single Switch unit and supports up to eight players locally. Have everyone bring over their Joy-Cons and resurrect the excitement of being at the arcade.

Replay saving and playback is an additional feature not included in the original arcade version. You can even change the replay camera, including off-course perspectives.