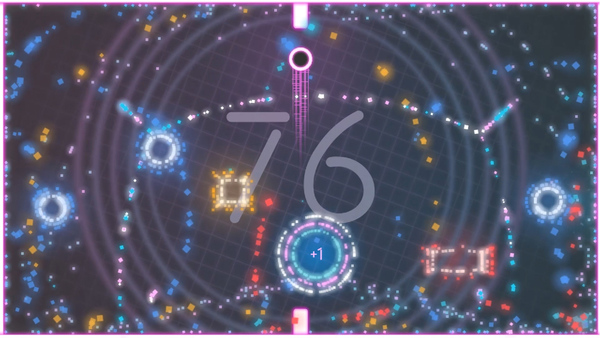 Ding Dong XL creator Adam Nickerson saw his game release on Switch yesterday. While the day a game releases on the Switch is exciting for any dev, the occasion was extra special for Nickerson. He's been a huge Nintendo fan for quite some time now, and he took to Twitter to share just why the release means so much to him. You can check out his full comments on the launch below.

Today, my game, Ding Dong XL released on the Nintendo Switch. This means so much to me that I can't express in a single tweet so I thought I'd try to illustrate my feelings through a thread of Nintendo Memories w/ some pictures, so if you have a couple minutes...

I have had a bit of a Nintendo obsession since I was very young, my family got our first NES when I was five or six and it was nearly impossible to pull me away from it. My brain never stopped thinking of video games.

I loved Mario Bros, Metroid, Maniac Mansion and Monster Party. So many of the games we had I didn't necessarily understand (Dragon Warrior) but their sounds and songs are permanently etched into my brain.

I remember when I first saw the Super Nintendo at a relative's house one Christmas. I was completely bewildered. They were playing Super Mario World. Yoshi, the cape, levels with secret endings! I just watched them play all evening, it was the greatest thing I ever had seen.

In my grade five elementary school class, we were asked to write a speech on a topic important to us. Of course, I chose Nintendo. I was picked from my class to perform it in front of the entire school and even won a trophy for first place. The topic was a crowd pleaser.

My family was fortunate enough to have a subscription to Nintendo Power from the start. I loved that magazine. The fold out posters, Nester, Classified Information, and those massive maps of games. I may have claimed I had an uncle that worked at Nintendo once or twice.

In 1995 I wrote in to Nintendo Power and was so proud of the response I framed it and hung it on my bedroom wall for all to see. Honorary Team Power Member, Jealous? #mother3

My family wasn't particularly well off, but my parents did an incredible job of providing us with things they thought were important, fortunately games were one of those things. We occasionally went to our local video store and could pick out a used game to bring home.

The Christmas Nintendo 64 released, we didn't receive the system as a gift on Christmas morning much to our surprise. You know kids, we were disappointed but tried our best not to show it as I'm sure we had other great gifts.

Hours later my parents called us all into the living room. They discovered a present behind the couch we had missed. We frantically opened it together and it was the Nintendo 64. I almost died from excitement. I will never forget that moment.

When we were kids my best friend Gordie and I would often walk to the video store on a Friday after school, rent a game, grab a huge slushie drink (ginger-ale was the bomb), and play video games until we had school on Monday.

My family acquired a second small TV for our "games" room from a local garage sale. This gave us the COOLEST place to play in the neighborhood. Especially because you could Daisy chain all those old consoles. That was so awesome.

Amazing Nintendo memories were made in that room. Playing GoldenEye with Brent (temple/rockets), Battletoads with David, Caila helping me with Lolo, even getting my mom to try and play Cruis'n USA. Oh Mom. That school bus never stayed on the road at all.

The only game that ever hooked my dad was Dr. Mario. We constantly had our Vs matches. Still to this day he claims to be the world champ and is totally modest and humble about it too.

Into my teen years people still knew the way to my heart was a Nintendo gift. I even won a costume contest with a really, exceptionally, horrendously bad Mario+Luigi costume with my friend Dave.

In my early twenties I opened my first business; an internet cafe. It had several console areas as well. Which to be honest was just so I could play all the latest Nintendo Wii games myself. (Or more bad costumes, still cool, right?)

Cyberspace is also where the Nintendo Christmas tree topper tradition started, which is still going strong to this day. Thanks it's on a much classier tree thanks to @hellobri

In more recent years I have had the pleasure of learning to design video games in my spare time (while I ran an IT business). Just using @unity3d and tutorials found on the web. Weirdy, people seemed to really enjoy my small arcade style games.

Having a little bit of success here and there resulted in me fulfilling many childhood dreams. Attending @E3 and meeting the voice of Mario himself are among the countless things I've been lucky enough to experience.

Last year I decided to move full-time into my game development. My home offices decor is super indicative of that I'm sure.

Thread limit? Time to streamline. Ding Dong XL -> Justin -> IGN -> Jared -> Kindafunny -> Greg -> Nintendo -> 1st GDC -> Nintendo Switch! -> Mind blown. Words will never explain the importance of these events to me. Next tweet, people I need to thank for one thing or another.

I have endless Nintendo memories that I share with many people. Even if I only sold one copy of Ding Dong XL today, I am forever proud and grateful to be a tiny part of the Nintendo story and maybe one day someone will have great memories of one of my games. Oh and...

I bought ding dong XL. I love the dachshund face!