Retro-Bit pays homage to the Nintendo 64 with the First Release of their Platinum Collection: The Tribute64 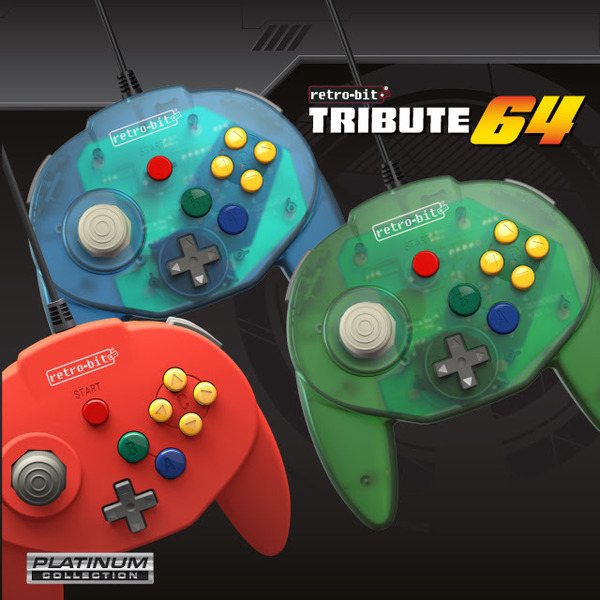 Pomona, CA -With the successful reveal of many retro gaming products at CES 2019, Retro-Bit® had announced The Platinum Collection. A line of controllers dedicated to some of the biggest retro consoles like the NES®, SNES®, and Nintendo 64®. Through Innex, Inc., it’s exclusive distributor, Retro-Bit officially unveiled the first controller of its collection: the Tribute64.

The Tribute64 Original Port is designed for exclusive use on the Nintendo 64®, while its USB® counterpart is compatible with PC, Mac®, Steam®, and the Nintendo Switch® is set to release springtime 2019 in the U.S. and Europe.

The design contrasts the original “M”-shaped Nintendo 64® controller which was initially made for three different hand positions. There had always been sparked debate among the gaming community regarding the look of the original Nintendo 64® controller where its three prongs were conceived to be uncomfortable for gameplay. Retro-Bit® made a version of their own and updated to two handles which have been deemed to be more appropriate. Retro-Bit® is set to bring a controller for the Nintendo 64® console for $25.99 and USB® port for $29.99. “Retro-Bit indulges with the retrogaming community. There was strong enthusiasm in creating a line of controllers fashioned after the top three retro systems. Beyond the aspect of dedicating a revamped version of the N64 controller, Retro-Bit’s goal is to enrich today’s gaming experience while touching on the retro-gaming side. They are doing that with the release of the Tribute64 and its two port versions that will reach a wide spectrum in compatibility.” says Innex’ marketing manager Richard Igros.

The redesigned Nintendo 64®-dedicated controller will come in three colors: Red, Forest Green, and Ocean Blue and in original and USB® ports.

Retro-Bit® also unveiled the wireless 2.4 GHz Tribute64 controller which will be later released in 2019 in colors Blue and Red.

All versions of the Tribute64 will be available on various e-commerce sites and your local video game stores in North America and Europe. Visit the Retro-Bit website here for where to buy.