A new wave of details from Famitsu
24 April, 2019 by rawmeatcowboy | Comments: 3 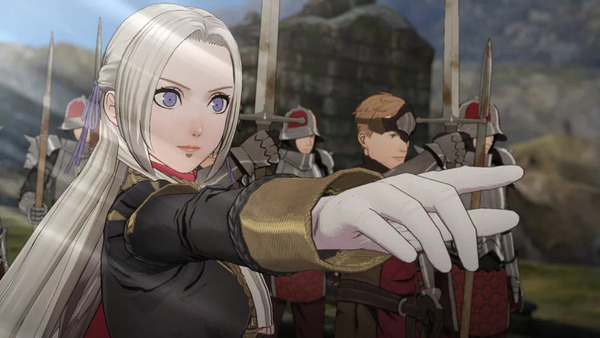 As mentioned earlier, this week's Famitsu has a new feature on Fire Emblem: Three Houses. We now have a translation of the new details, which you can check out below.

(default: M ベレト Byleth, F ベレス Bylese?) You originally worked as a mercenary but your talents got noticed so you become a professor at the elite Officer's Academy. Your mom already passed away so you live with your dad who was leader of the Knights of Seiros and now leads a mercenary band. As a professor, you must choose one of three houses to lead its students. Each house has many different students to meet and train, each with their own personalities and skills.

A legendary being who is also said to be the strongest knight in history. Was summoned to Garreg Mach Monastery together with the protagonist, which makes him return to the Knights once again.

A mysterious girl who looks young but speaks in an old manner. She saves the protag at the fateful night. She normally doesn't show herself up and she speaks with telepathy into your head, so no one except you notice her. She also lost the memory of her true self.

Princess of the Adrestian Empire who has been promised the position of the next empress. A talented woman who has a cold & noble atmosphere. Adrestian Empire has the longest history. Many people here are more skilled in magic than weapons.

An eloquent youth who has good manners & embodied chivalry, but he somehow holds a shadow. Perhaps because the Holy Kingdom of Faerghus is known for its knights, many of the students here are good at using spears.

A friendly youth whose smile fits him well. Although he doesn't seem like thinking of things too deeply, he has a sharp insight. Compared to the other classes, Golden Deer has more commoner students. Many of them are also good at using bows.

FE3H is confirmed to have a time rewind system, made possible by Sothis' ability to turn back time. The system is similar to FE Echoes where you can rewind per movement but the amount of usage allowed is also limited.​
​
Terrain effects: Other than determining movement costs and evasion rates, some spots may have gimmicks such as healing HP or even warp a character to another spot. When the game is just booted, there will be choices for Normal/Hard difficulty and Casual/Classic mode.​
​
Class Change now uses a Qualification Exam system: Character needs to spend Exam Passes and the chance of passing improves with correct skill ranks. Once the class has been unlocked, the character can freely change back anytime. Level won't go back to Lv1 either.​

Each char has good & bad ranks​
​
Characters in FE3H start in Commoner or Noble class depending on their origins, but these starting classes are same stat-wise: Can just use some magic with no other highlights.​
​
The first class upgrades after Lv5:​
​
Myrmidon (Sword)​
Soldier (Spear)​
Warrior (Axe & Bow)​
Monk (Magic)​

I really ..really hope that this game isn't going to screw up fire emblem.

Wait? Not only is the rewind feature back from echoes (which let you redo a move), there is also "beat of heaven" which allows you to go back many turns? The rewind feature made classic mode in echoes irrelevant....If you character died, you just redo you turn and continue on with your day... These features make the game sound easy.... I'm really hoping this game is good, but so far, it's not really interesting me...

Beat of heaven is the rewind feature and if it's nerfed then I think it will be fine it just needs lesser uses because that's what made it OP in Echoes. (they could also give it a cooldown)