A full recap of the big event from Nintendo
07 May, 2019 by rawmeatcowboy | Comments: 0 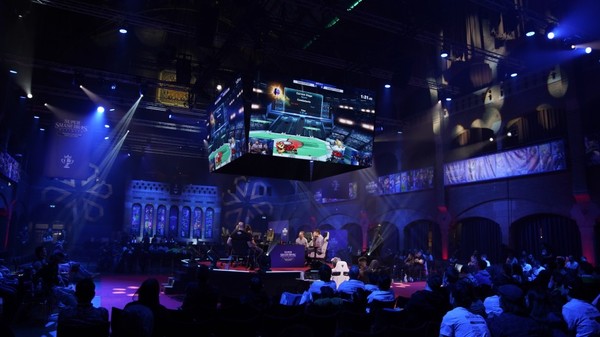 11 of Europe’s finest Super Smash Bros. Ultimate teams came together at Beurs van Berlage in Amsterdam on 4th and 5th May as they duked it out to decide who would take the title of European Smash Ball Team Cup 2019 Champion.

Every team gave it their all during the course of the weekend, but it was the tight teamwork and skilful moves of Team Ehre Germany and French national champions Guezmer that saw them advance to an anticipated final matchup, with the German team clutching victory in a hugely competitive finale.

They will now represent Europe at the Super Smash Bros. Ultimate World Championship 2019 3v3 in L.A. on 8th June, competing for a chance to become world champions!

The French side came into the tournament as one of the favourites, featuring acclaimed Wario player Glutonny, while the Germans quickly earned favourite status in their own right over the course of the two tournament days. The German team displayed exceptional teamwork in 2v2 matches and earned some landslide victories, not dropping a single game until their semi-final victory against dark horses Team Popoff from the Nordic region. Into the grand final, the pulse-pounding saw great teamwork and strategy from both the French and German teams, peaking in the tournament-deciding Smashdown match, where RobinGG of team Germany took the surprising choice of Wii Fit Trainer against the Toon Link of France’s Leon. Germany claimed victory in front of hundreds of fans in Beurs van Berlage, Amsterdam.

“I never planned to play Wii Fit Trainer but we were out of resources. Light said to me go with your gut. So I knew: Wii Fit,” said RobinGG after the final.

“Going in we were probably not the favourite, so it feels even better to win,” said German player Light, whose Palutena claimed countless important KOs over the weekend. Addressing the team’s potential for victory in the upcoming World Championship, RobinGG – whose victory granted Germany the trophy – had a message to other regions: “We don’t have anything to lose. If other regions think we’re weaker – we can show them we’re not.”

Not only did Germany leave as champions of Europe, they also walked away with a special trophy, customised Super Smash Bros. Ultimate Nintendo Switch Pro Controllers, and the jerseys they’ll wear when they represent Europe at the Super Smash Bros. Ultimate World Championship 2019 3v3 in Los Angeles on 8th June, competing against teams from North America, Japan, and Australia/New Zealand for a chance to become world champions.

The TPs, made up of Lucretio, Streakz and Ander, represented the UK & Ireland at the event and did us proud! After being drawn in a tough group with Germany and Italy, the team managed to go through to the quarter-finals thanks to a hard-earned victory over the Italian side. They faced France in the quarter-finals and took it right down to the very last game.

“Some people thought it would be free for France but it wasn’t. GGs everyone,” said Streakz afterwards on Twitter.

We’d like to thank the team for representing the UK & Ireland in Amsterdam.