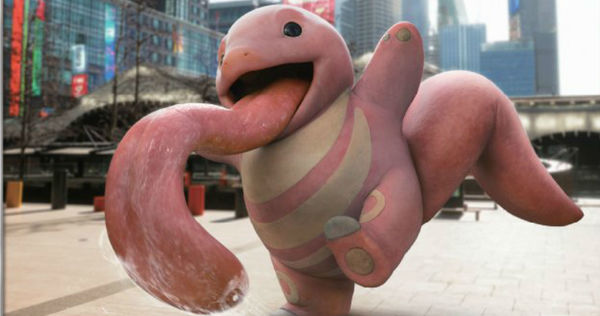 If there's one thing Pokemon Co. would change about the Detective Pikachu movie, it might be a specific Lickitung scene. For those who don't know, there's one part where the Pokemon licks actor Justice Smith. According to Erik Nordby, the visual effects supervisor on the film, Pokemon Co. really wasn't a fan of the moment.

We built that tongue in reality with a big chunk of latex. It’s completely gross, but we had to have something to wipe Justice Smith’s face with [the actor gets licked by Lickitung in one scene].

For something to feel real, it has to have real world grit and texture. But the Pokémon Company would see that and think it was dirty. We had to walk them through a whole series of slides and build the trust that we weren’t going to make these things disturbingly dirty.

I wouldn’t say that [the scene with Lickitung] was the Pokémon Company’s favorite scene in the movie. That’s one where we got right up to the edge of what they would be comfortable with.

This is what happens when you make a Pokemon with a huge tongue and don't think 'you know, this might look bad if it was made super realistic in 20-30 years.'

I liked it. It was gross, but it was what Lickitung would actually do. Does anyone know what the Pokemon on the powerlines were?

I just love the fact that they laughed at the Mr Mime scenes and thought they were great, but Lickitung of all mons would be the one to almost go 'too far' for them. Something funny abut that. ^^

Excited to actually see the movie, tho I have to wait for it to release on DVD/Bluray.

pokemon co are hypocrites, they made a lil monster with a giant tongue that licks things, need i say more lol