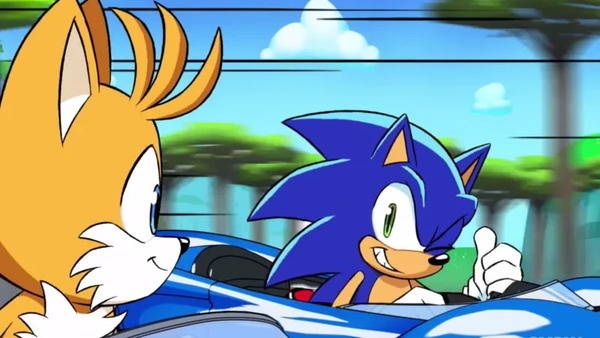 As we shared earlier in the week, Team Sonic Racing got a 34/40 from Famitsu. Now we have details on just how the reviewers came to that score. Check out the full review from Famitsu below.

1st reviewer: The sensation of running through undulated courses, with extreme speed using drifts and boosts that are easy to control, feels good even if you’re not a Sonic fan. In this solidly created action race with regular features properly held in, this game’s unique feature is Team Battle where 3 people go on racing in a group, which adds into the feedback and sense of unity that can’t be tasted anywhere else. Being able to taste this feeling on co-op plays with not only obviously people but also with computer is great indeed. 9

2nd reviewer: Including a team battle system in a racing game is ground-breaking. Starting with the Line Boost which speeds up each other, the Touch Dash which can quickly recover spun partners, transferring items and many more chancs to cooperate during races; the more you cooperate the more merits the team will have, which is good. The format of competing rankings as a team is a structure that can be enjoyed with a broad range of people which is good. The controls are also easy to grasp, and the drifting etc are also exhilarating. 9

3rd reviewer: The compatibility between Sonic series – which has an exhilarating sense of sprinting – and racing game is simply perfect. Cooperative features like sharing items with teammates and helping each other to speed up provide a uniquely different fun factor. I’m grateful to the AI which matches up to the player’s level and contest positions until the end. A lot of hindrances will come from behind, so other than switching views through a button, I wish there were also a back mirror somewhere in the broad screen. 8

4th reviewer: Performing team cooperation controls like drifting that absorbs right in the line and sharing Wisps (items) during a race itself is fun. While the mini-game styled missions give an accent while progressing through Story Mode, they require a very serious walkthrough. The pleasant BGMs which arranged legacy Sonic series musics ought to immerse fans from the Mega Drive era in deep emotions. 8