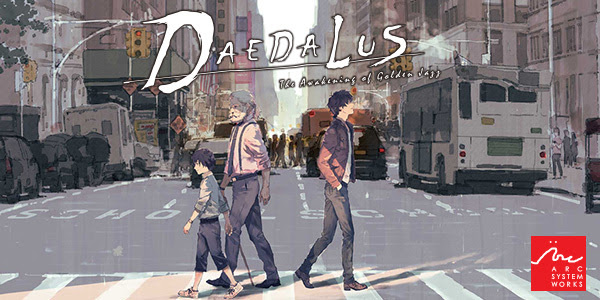 Rolling Hills Estates, California – May 23, 2019 – Arc System Works America, Inc. is thrilled to announce that Arc System Works' crime thriller, Alternate Jake Hunter: DAEDALUS The Awakening of Golden Jazz, a prequel to the Jake Hunter series of games is available today in North America (US, Canada, Mexico) on the PlayStation®Network for the PlayStation®4 and Nintendo Switch eShop. The Steam (PC) version will be available at a later date.

In the wake of the death of his grandfather, Saburo Jinguji heads to the United States to uncover the truth. Utilizing a new 360 degree investigation mode, Alternate Jake Hunter: DAEDALUS The Awakening of Golden Jazz blends true detective work like interrogations and clue-finding with unique storytelling elements to deliver a thrilling murder mystery.

RETURN OF A LEGEND – Hirotaka Inaba, the Scenario Writer of Tantei Jingūji Saburō: Yume no Owari ni (At the End of the Dream) released in 1998, returns to write the scenario for “Awakening of Golden Jazz”

TIME IS UNDER YOUR CONTROL – Switch between the different stages of Saburo’s life as you piece together clues and solve mysteries.

STANCE CHANGE SYSTEM – Read and interact with the other person’s expressions and emotions to uncover the truth.

TREE OF THOUGHT – Visualize your own thoughts, organize and search for evidence, and pull testimony. As your information grows, your tree will “bear fruit”.

SHARPEN YOUR SENSES – Your “Sharpened Five Senses” allows you to visualize clues in unique ways.