NPD: Top 10 software sales for Switch and 3DS since launch

What games have done the biggest business?
29 May, 2019 by rawmeatcowboy | Comments: 13 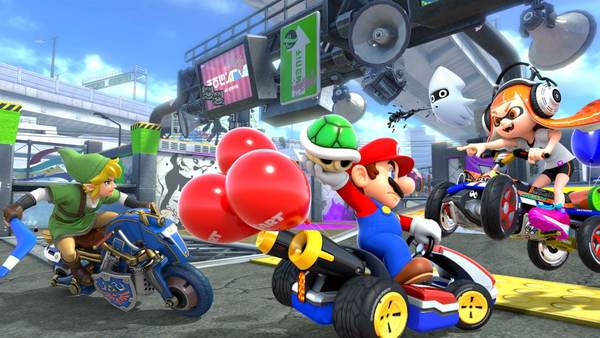 NPD's Mat Piscatella has released some interesting information on both the Switch and 3DS. Wondering what the top games are overall for both platforms? In the charts below, you can see the top 10 for each system. This chart tracks all software releases overall, so you're looking at the top 10 games since launch. 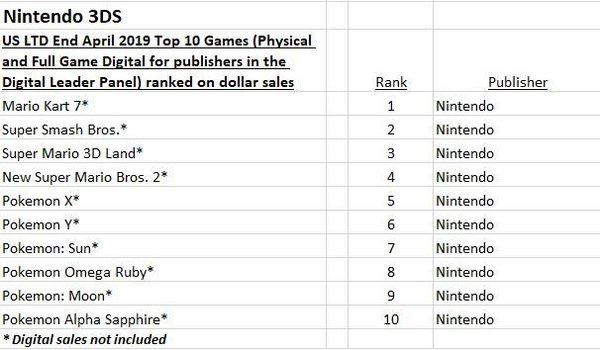 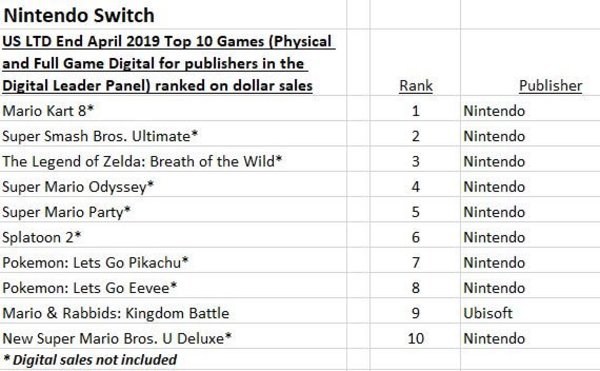 Thanks to Dondom95 for the heads up!
Source: Link
Rating: 0

I really don't want the system to just be forgotten and only remembered as a failure while all its good aspects are retroactively attributed to the Switch instead.

I really don't want the system to just be forgotten and only remembered as a failure while all its good aspects are retroactively attributed to the Switch instead.

I agree with the sentiment, fans of a console manufacturer shouldn’t shouldn’t determine the value of their consoles on financial success or recognition from the wider audience. The Wii U in my opinion had only one major problem, it didn’t sell well, it didn’t lack for 1st party games or functionality. If people weren’t so busy on fixating on its financial failure, they might pay more lip surface to its great library. It’s last year was eh, but’s it’s prior 3 are Nintendo at their near best

I would only consider 2 years of the Wii U's life to be great.

2016 was post-Iwata, who was the biggest advocate for the Wii U. Whereas Kimishima even admitted he disliked the system from the beginning and he practically torpedoed its final year as he moved all the resources to Switch development. It might've been pretty good otherwise. Hell, he even wrapped up the system as soon as he did so as to "right the ship". I can't entirely blame him for trying to look out for the company as a whole, but I really disapprove of how he treated the Wii U.

"Wrap up Ultra Smash and push it out, Camelot. We'll finish the game as Aces. Don't even bother with Mario Golf U; do something for 3DS [Sports Superstars] in the meantime." "Delay BotW so we can port it, and tear out the second-screen stuff so the Switch version doesn't look bad." "Hold off on DLC 3 for Mario Kart 8, we'll package it as exclusive content for a Switch port." "Just put those Wii U assets into a quick board game, we'll work on Animal Crossing 5 for real on Switch."

And so on. Hell, I wonder how much SMM2 content was planned as DLC for the original.

That's a lot of assumptions honestly. I doubt they had a great 2016 planned, it was always going to be barren to make way for Switch.

I appreciate you acknowledging that the Wii U would’ve provided the definitive home console experience for breath of the wild had they not totally for business reasons only, gutted gamepad functionality. It’s fairly clear that you were supposed to interact with divine beasts in real time.

Inventory management would be way better, there was probably touchscreen keys for the ruins, so u didn’t have to switch bombs in a menu, and u could just activate the others immediately too, alas, not to mention a very helpful map, that would totally boost the stamp beacon system.

of those 3 years I’m surprised that you picked 2015 as which I regard as the weakest, though still really good due to splatoon, Mario maker, and Xenoblade X(the only one I like personally), Yoshi’s woolly was okay, I guess. I had fun with Kirby’s rainbow curse, speaking of Rainbows, runbow was fun. Educate me Mr. Shoemaker on games I’m blanking on if you’d be so kind

Honestly yeah that's exactly why 2015 was such a great year, and I always wonder why its seen as the weaker year. Splatoon and Mario Maker were the highlights of the Wii U, arguably two of it's best games. Xenoblade X and Yoshi were fantastic. Then there were minor games to pad out the year like Pokken Tournament, Kirby Rainbow Curse, Smash Bros and Mario Kart DLC. It also had two big duds in Mario Tennis and Amiibo Festival.

2014 was great as well with Smash, Kart, Donkey Kong, Bayo 2. I just feel like Splatoon and Mario Maker were a breath of fresh air and something new, while Smash and Kart were great new entries in established series.
I definitely see 2015 stronger than 2012, 2013, 2016 and 2017. At the very least, the Wii U's second best year.

Again 2015 was a really good year and I’m not really concerned with dissuading you from your preference , rather I’m simply making a case for the other years. Even 2016 which I prefer over Nintendo’s 2018. Here’s a list of exclusive(or were supposed to be) games I regard as great or notable from those years

I think that the reason why he considers 2015 to be a weak year for the Wii U and Nintendo was because of two things. E3 2015 and Iwata’s passing.

It's worth noting these lists are for U.S. releases only. Throw in the international sales (especially Japan) and they would be a little bit different; i.e. Pokemon would be 3 or 4 of the top 5 on 3DS, and Splatoon would be higher on Switch.

I dont think the Wii U library is as great as people make it out to be. Most of Nintendo's titles for Wii U were extremely safe sequels, lame spin-offs, games that lacked ambition, or remakes.

3D World while a fine game. Can you honestly tell me 3D World had as much effort and ambition put into it as Galaxy or Odyssey?

Tropical Freeze is a great game and one of the best 2D platformers of all time. But at the end of the day it was still a relatively safe sequel to DKCR.

Xenoblade X, Bayonetta 2, Wonderful 101, and Tokyo Mirage Sessions were all great games (I hear only played Bayo 2) but they were all extremely niche games that only the hardest of the hardcore Nintendo fan would give a crap about. None of those games were system sellers.

Wind Waker HD and Twilight Princess HD. The former is a fantastic remake that improves on the original but is still a remake of a game most have played. The latter is a cheap cash-in slightly up ressed port of a 2006 game with a new "dungeon" locked behind an amiibo.

New Super Mario Bros. U was just another mediocre play it safe bland by the books game in the "New" line.

Yoshi's Wooly World, Bayonetta 2, Captain Toad, Super Mario Maker, Mario Kart 8, Breath of the Wild (though I'd hardly count this as a Wii U game), Smash Bros. Wii U (even if its my least favorite Smash), and Pikmin 3 were the only true FANTASTIC original Wii U games IMO. 8 games in the span of 5 years...

EDIT: Splatoon was great too but the problem was that game launched so bare bones and took a year and a half to get fully featured by the time the game got all the content it SHOULD'VE launched with the small Wii U userbase moved on. Not to mention Splatoon 2 trumps it in almost every way...