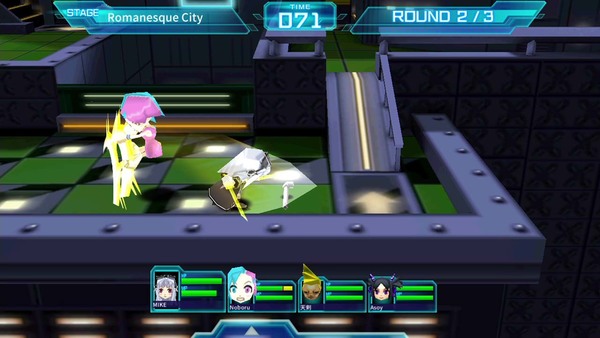 Tokyo, JAPAN – June 6th, 2019 – CyberStep, Inc. is pleased to announce a new event, the “1 on1Challenge”, for GetAmped Mobile, the online action fighting game for smartphone and Nintendo Switch. And two new accessories, “Arcana XXI” and “Mechanical Arms” have been added to the “Weekly Gacha”.

With the Wednesday, June 5th update, the new “1 on 1 Challenge” event is now available. During the event, participate in Duels to win rewards like GM, gacha tickets, and more!

You can click the icon in the lobby to see the event details as well as accept your prizes.

(Subject to change based on maintenance schedule)

※Leaving the match, disconnecting, or closing the app before three rounds have been concluded will not count towards total matches completed.

Once again the “Weekly Gacha” line-up has been switched, with two new accessories being added! This week introduces two exciting new accessories: the master of the four elements “Arcana XXI” and the four armed fighting machine “Mechanical Arms”!

Allows you to call upon spirits of the four classical elements.

A four armed machine attached to your back.

Having 4 mechanical arms on your back is great for mangling all of your opponents!

The action game with over 30 million users! Fight to the top in fiery battles!

The popular PC game, “GetAmped”, with over 30 million users worldwide has come to smartphone and Nintendo Switch!

Battle it out with your rivals using endless combinations. Styles like Ninja, Superman, and Telepather, unique accessories, and over 100 different kinds of weapons!

And customize your appearance however you like with the “Skin Editor”!