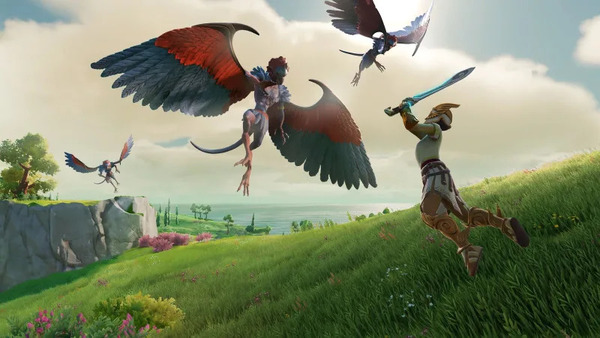 Ubisoft just revealed Gods & Monsters, and upcoming action-adventure game hitting Switch on Feb. 25th, 2020. Check out some new details below that were not covered in the initial press release.

- customize your character
- gameplay involves jumping, swinging a sword, shooting a bow and arrow, floating from high perches using a bird power, use some sort of telekinetic ability to toss trees at enemies
- uses a stamina meter
- presented as a tale told by the poet Homer to his grandchildren
- equip special ability-enhancing gear

Some noticed that the game, both in visuals and gameplay, seems to borrow a lot from the Legend of Zelda franchise. Here's what Ubisoft's Jonathan Dumont had to say when Kotaku brought up that point in an interview.

“It’s flattering that we can be compared to that, but from a storytelling point of view it’s going to be a very unique adventure. The abilities will change, as well as the scope of how it blows up. It is influenced a lot more by Odyssey in that sense mechanically. The fact that we can choose and create our own character and customize it as well, there’s quite a bit that will make it its own.”

They should do Kid Icarus DLC for the Switch version.

Costumizable character is a big Yes for me, i want gameplay videos first to asure a buy from me...mqybe exclusive zelda and kid icarus content for nintendo? ;)

How does the meme go again?
- Can I copy your homework?
- Sure, just change it up a bit so it's not obvious...

No that's not Link RMC, Link isn't a woman or customizable, and will hopefully always be that way.

Anyways the game looks fun, and I'm glad it's coming to switch. I'll definitely pick it up when it comes out.

I get where some of you are coming from, but at the same time, personally I've been sick for a long time, seeing major third party games that get ported to Nintendo systems, having Nintendo franchise things slapped into them for no better reason than "Oh, this will make NINTENDO fans buy it!". As if people wouldn't have bought Skyrim on Switch, if they hadn't slapped Zelda stuff in it. As if people wouldn't buy Tekken if they didn't slap Mario in it. Etc. etc.

On the one hand, it IS cool to get exclusive content, if you happen to own the console the exclusive content is for. But on the other hand, as stated, this notion many third parties seem to have, that their ONLY chance to sell to "Nintendo Fans", is to slap Mario or Zelda or whatever into it, is insulting. So no, I would not want to see Kid Icarus or Link in this game on Switch. I'd rather see a new (GOOD) Kid Icarus game on its own.

And as for this game itself, while it does look like it could be promising, IMO, Ubisoft does not have a great recent track record. And if this is by some of the same people who worked on Assassin's Creed games, then if this PLAYS anything like Assassin's Creed, I'm really not all that interested. Hopefully it won't, and will just be a fun action/adventure game.

Same with Starlink. I've played the game since its launch and I have yet to even touch the StarFox content. It's cool that it's there but it just feels like bait and not with what the original game set out to be.

I can assure you that if I get to make a game on a Nintendo platform, I'll try to move hell and heaven to get a small Nintendo cameo in it, and that won't be for any "sales". It would just be that awesome. Not all 3rd parties do it for the reasons you said.
That's also the number one question any dev get when their games hit a Nintendo console. At this point, not trying is a lost opportunity.