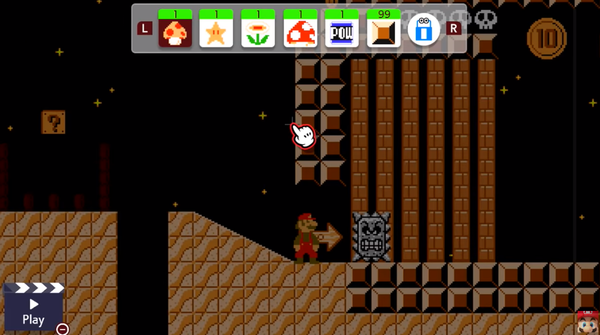 Super Mario Maker 2 producer Takashi Tezuka had a lot to say about the game during his appearance on Treehouse Live. Among the details shared was info on the game's assist mode. If the game sees that you're struggling during Story Mode, it will open up the Luigi assist mode. This comes through a 'Part' button in the bottom left-hand corner of the screen, and it will give you access to helpful items like stars, mushrooms, and more. Tezuka shared the following on why this option was included.

"I wanted to make sure that there was something for people who might have trouble with these stages, so that they would also be able to make their way through it - so include some way to help people that might not be as advanced as other players. This is a game about making, so I thought it would fun if there was a way to include a little bit of course making, even when you're playing a course, like this, so we included this Luigi assist mode. I wanted people to just have a light-hearted casual way to be able to add some making elements to courses while they were playing them...That means you don't have to persevere"

That's such a clever idea. An assist mode that uses the game's mechanics.

Just give me the star for those enemy-filled troll levels.

It's for story mode ;) And those levels usually have a Star in a hidden block somewhere.