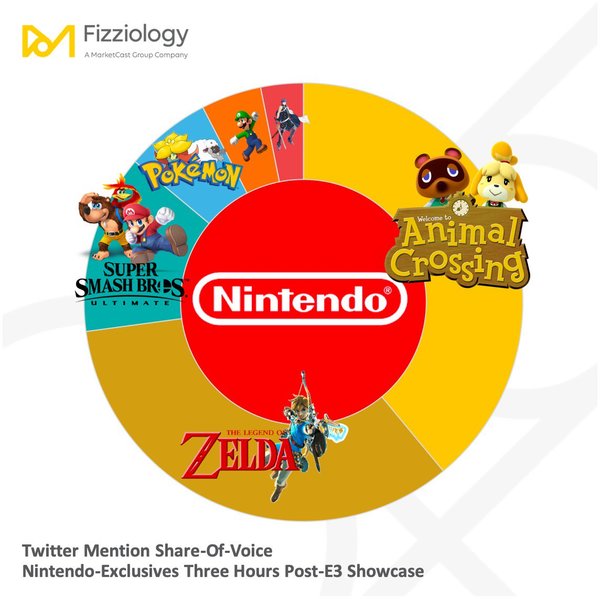 Fizziology, a company that tracks social media stats, shared the above chart looking at the hotly-discussed games following yesterday's Nintendo E3 2019 Direct. According to their data, Animal Crossing: New Horizons was the title that got the most mentions on social media. Obviously we don't know if it was good/bad commentary, but it had people talking!

Seems about right, because people were expecting Animal Crossing in some capacity. Zelda got a boost because it was unexpected for them to show that trailer.

People were expecting smash bros, but it was the fact that Banjo was announced that the American audience went nuts (With Japan interested in Hero).

We already knew about Pokemon due to the pokemon direct, Luigi's mansion is nintendos BIG push, especially since you can see it at the E3 site with his area being decorated and essentially an experience. Fire Emblem is just kinda there, with the game already coming out in 6 weeks. Fire Emblem essentially got 2-3 min the direct, and 30 for the treehouse, which is very minimal.

How much rumor and speculation could Animal Crossing have?

Yet investors don't seem to acknowledge that.

What!? No dark crystal mentions. lol