Bloodstained: Ritual of the Night's "Iga's Back Pack" DLC delayed slightly, devs offer an update on the shipping situation in Japan 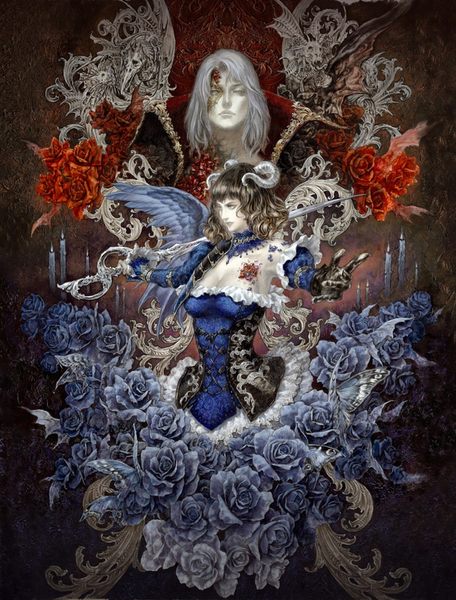 The latest Kickstarter update for Bloodstained: Ritual of the Night announces a delay for select DLC, and shares an update on the launch situation in Japan. Not exactly the best news, but there is a nice bit of info included in the update. All $100+ backers will now receive, alongside their other rewards, a 16x20 fold-out poster of the art Ayami Kojima made for the Alchemist's Treasure package. The art for that poster can be seen above.

Check out the full info on the DLC delay and Japanese launch below.

We have a slight delay to announce for the availability of the “Iga’s Back Pack” DLC on consoles. The DLC will be available:

The team ran into some issues for the DLC on consoles, and obviously we didn’t want to delay the whole game because of it. We regret this delay but appreciate everyone’s understanding, quality has to come first!

We also have an update for our Japanese backers on the delay for their territory. Currently we’re still working to confirm exact dates but initial estimates indicate a delay of a few months to release the game publicly in Japan. Everyone on the Bloodstained team regrets and apologizes for this inconvenience, publishing the game in Japan as soon as possible is a top priority for all of us and we’re taking the following steps to address this for our backers in the short term:

All Japan backers will receive a Steam key for the game on June 18, 2019
As soon as digital keys are ready for PS4, NSW and XB1, they will be sent to all Japan territory digital backers. We anticipate this will be before the public launch of the game.
Physical game copies will also be sent as soon as they are ready.

We’re also evaluating other efforts to not only speed up delivery to backers, but to possibly provide something extra to Japan backers in the future due to this delay.

There's also an update regarding our physical PC backer copies that we think everyone will like. We are going to be providing all our PC backers with their digital keys at launch, and waiting until all future free stretch goals / content is released before sending physical PC copies of the game.

We've heard the feedback that fans would like the most complete version possible on disc. While we can't do the same with console orders due to first-party logistics, release timelines and costs, by offering this to PC physical backers we hope to provide them with a crystallized encapsulation of the Kickstarter content that you all helped make possible and fulfill the "collector's desire" that I'm sure many like myself hoped for when backing for a PC physical copy. We'll be sharing more about when to expect physical PC copies as we obviously reveal more about the free dlc / stretch goals in the future.

An enormous thank you to everyone for your continued support and understanding, we're almost there...see you in a few days...