Was the Switch Mini just unofficially announced to me?

A gaming company in China just wrote to me letting me know they’re releasing accessories for the Nintendo Switch Mini.

Would a company make products for a console they didn’t KNOW existed, and didn’t have in hand? pic.twitter.com/yQgk7xCbUn

Here's something we know to be fact. Accessory makers will often get hardware dimensions/specs early in order to create accessories for up-and-coming devices. That's about as far as facts go in this instance.

As seen in the Tweet above, a Chinese company is claiming to have a set of Switch mini accessories in the works. Their website even has a full rundown of what they plan to make. We know the design of the Switch in the pictures is a fan mock-up, but I guess that's the best they can use right now to represent what they're making. 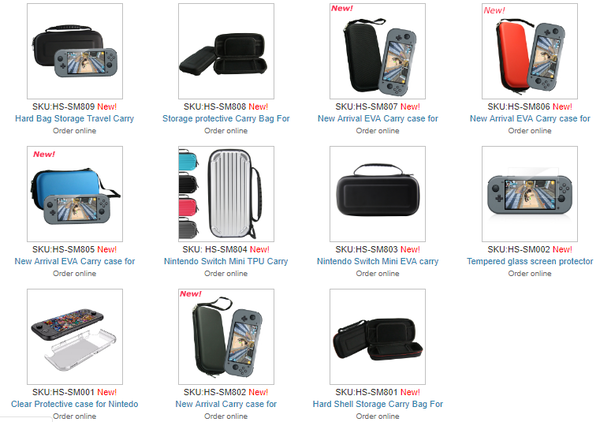 Now, would a random Chinese accessory manufacture really get the heads-up on a Switch mini? I guess it's possible, but it seems rather unlikely. Still, they have an entire lineup of items on their site, so if they're creating these accessories based on a hunch, they're about to have a big problem on their hands!

I mean we've heard rumblings of the Mini for a while now, it's not entirely out of the realm of the possibility that some specs have managed to leak. These guys obviously decided to go all in before anyone else could, but overall it's not terribly surprising.

Looks legitimately horrible, why even call it a switch if it doesn't have that functionality.

It would probably still have a dock and be able to switch to console display.

Would just need external controllers and a charge dock. Maybe chargers for the controllers on the dock since it's mostly wasted space.

Dunno how small I'd want a Switch, though. It's not terribly large as is; I bring it on planes and plan to next week for travel to CEO.

So it can dock, but doesn’t have removable joycon? Meaning you’re forced to buy expensive additional controllers if you want to play it docked. Which means you’re not really saving any money on a ‘cheaper’ Switch mini, but you are losing functionality and customizability. What would be the purpose of this product? Worst rumor ever.

It's called "having options". Obviously if it doesn't appeal to you, then don't buy it, but I think it's a great thing that customers have an option for a cheaper Switch unit. I know of people (not myself) who almost exclusively game in handheld mode. For them, they'd no doubt have bought this unit. So going forward, why not give people the choice?

Looks also good as maybe a second unit to pickup for kids.

What would be the purpose of the 2DS? I mean, a 3DS WITHOUT 3D? Why bother?

I wasn’t a fan of that move either, but at least it cut production costs for some people would never use the 3D feature anyway.
However in the case of a “Switch mini” with non-detachable joycons, there is no consumer who benefits from having the joycon permanently attached to the Switch. I have to buy a pro controller or a new pair of joycon just to play docked or to play with a friend. Basically ruining their spot-on marketing up to this point. Mind-bogglingly stupid, and I sure hope Nintendo doesn’t follow the sheep pining for this online.

One more point. Joycon are small. They fail (often). Buttons go bad, joysticks drift, etc. But it’s no big deal currently because you can swap out the faulty joycon which is leagues easier/cheaper than replacing/repairing the whole Switch. I maintain, this idea of a “Switch mini” with non-detachable joycons, if it happened, would be a huge folly after nailing it with the Switch.

Maybe you get people in with the cheaper price, they build up a collection of games they really enjoy, decide that hey it’d be cool to play them on the TV, maybe try some of them in multiplayer, later go out and buy the add ons to make that happen. If they’re forced to pay for that additional stuff they don’t initially care about they might not get into the system whatsoever.

Also, as has been said before- kids. Was never unusual to see families whose kids all had their own individual DS or Game Boy back in the day, but back then you could get two of those for the price of one Switch. Having the option to get a much cheaper Switch for the other kids would be great for families.

This wouldn’t stop Switch being what it is at its core or create any identity issues for it. iPod nanos didn’t transform the perception of iPods being able to hold massive amounts of music at the time just because it held a tiny fraction of what the main one could. It was just an option.

I think the Switch Mini might be great for families that might want to have multiple Switches but don't need to have every Switch connected to a TV, especially for multiplayer games.
I mean, that would work great if there was some kind of download play feature like the other portable consoles had.

I dont doubt that accessory producers at least know the dimensions of the (at this point, inevitable) Switch Mini.
These type of leaks often happen when folks are trying to speculate new smartphone models.

That said, I dont think the images represent the final version of the Switch Mini. The biggest tell is that the model in the Clear Protective Case image looks different from the others.

Not sure if you’re actually being serious?

Not serious. But a joke is often better if you're not sure whether it's a joke or not, so maybe I shouldn't have replied.

Sounds exactly like something Nintendo would do. Switch Mini incoming!

Well, first step first. Compare their pictured items with preexisting designs. It will be easy to dismiss their claim if all of their promotional material is stolen from other accessory manufactures, and in this case as well, fan-made concept art.

Combing through switch accessories to find these exact pictures is too much for me, but I recognize many of these designs as preexisting accessories on the market, so it's not hard to believe they are just pictures and that this company has no specifications or insider knowledge. Switch Mini is simpler to pick out, and yeah, there's a pretty old fan-made concept that looks almost exactly like this with the only difference being the removal of the Capture button. I don't see why Nintendo would relocate a capture button to the outer edge with things like the volume button, or why they'd remove it. It just seems like a small edit to help their info seem more legit, but it wasn't thought through.

I will be shocked if a new cheaper Switch model isn't released before Pokemon Sword and Shield arrives. It's practically guaranteed. Expect an announcement out of the blue, with it on the shelves within a few weeks.

It still ”switches” if it can be docked.

And table top mode with the split joy-cons for some good arcade style gaming which was one of the big selling points?

Well, 2 out of 3 modes still merits it the name. :D
Maybe it could be called the ”Nintendo Half-Switch” lmao

I just realized they already thought of a perfect name:
Nintendo 1-2-Switch

It’s entirely possible that they haven’t produced any actual Switch Mini accessories but are betting on it coming based on industry intel/rumors and are just trying to get attention by announcing support early.

Very possible. Cheap accessory makers often try and guess the design of new items like iPhones before they are actually a thing and sometimes they are wrong.

It's a bit comforting to me that based on what I'm seeing in those pictures I don't want a Switch Mini. I just don't feel like buying a new Switch right now.

Of course, it's all speculation I suppose.