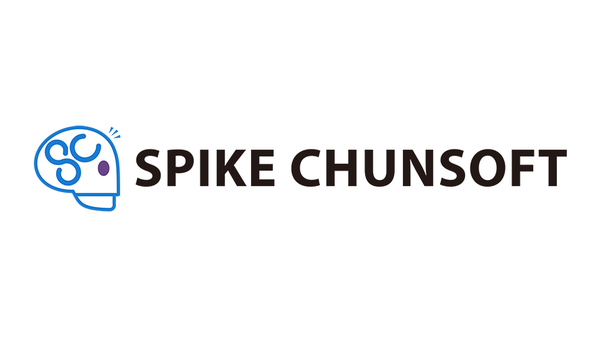 Spike Chunsoft is going all out at the Anime Expo 2019. First up, Spike Chunsoft will announce three new titles for localization while at the show. This info will be shared via a panel on July 4th, 2019 at 1:00 p.m. ET. Two of the new titles are from Mages, and the other is from Spike Chunsoft’s Japanese branch.

Following that, Spike Chunsoft revealed other panels for the event, including panels for AI: The Somnium Files. Check out the whole rundown of Spike Chunsoft's appearance at Anime Expo 2019, as well as the various goodies up for grabs, via the press release below.

There will also be three panels, autograph signings, and the chance to redeem pre-order prizes at the Spike Chunsoft booth in the West Hall Lobby! See below for more details.

About the Guests of Honor

Director and scenario writer at Too Kyo Games returning to Anime Expo to promote his latest project, Spike Chunsoft's AI: THE SOMNIUM FILES!

His skills (and eccentric creativity) shine in his adventure titles such as the Zero Escape series (including the award-winning Virtue’s Last Reward), Punch Line, and Ever17 -the out of infinity-.

He is well known for his unconventional plot twists and offbeat humor and is still keen on crafting many genres, many games, and many stories.

Character Designer and Illustrator. He began his career in 1999 with the creation of an original comic series and quickly gained notoriety creating character designs and illustrations for anime and games.

He is best known for his work on Pokemon GO, the Fire Emblem series, and Netflix's Godzilla Trilogy.

About the Industry Appearances

The producer and director of the action game CRYSTAR which releases in North America on August 27th, 2019.

Fuyuki Hayashi directed and produced CRYSTAR, an action RPG featuring tears as a major theme. He makes his appearance at Anime Expo 2019 to express his passion for his first original game title. At his panel session, he will discuss in detail CRYSTAR’s unique world and characters, as well as its game mechanic of crying to become stronger.

The main character designer for the action game CRYSTAR which releases in North America on August 27th, 2019.

RIUICHI is a motivated and spirited illustrator from Japan. He has worked on many types of projects, including books, cards, and social games, and this will be his first appearance at an overseas event!

Gothic-themed illustrations are his specialty, which is why he was entrusted with the role of main character designer for CRYSTAR. He is scheduled to perform a live sketch of a character who appears in CRYSTAR during our panel session! Be sure not to miss his intricate yet elegant illustration skills! You can also catch his speed painting videos on YouTube here: https://www.youtube.com/watch?v=cpOPs_c4flU

A-set, a.k.a. Tesa, is an internet idol under the entertainment office Lemniscate. She is a cheerful 18-year-old girl from Tokyo, Japan who loves video games. She can sing, dance, and does Let’s Play videos in her spare time. She’s on a mission to win a Grammy and be Spike Chunsoft’s cutest internet idol ever!

Join the Spike Chunsoft team for the live premiere of internet idol A-set's weekly video with AI: THE SOMNIUM FILES Director Kotaro Uchikoshi and a special appearance by the voice cast!

AI: THE SOMNIUM FILES Panel with Uchikoshi and Kozaki

Zero Escape series Director Kotaro Uchikoshi and Fire Emblem series Character Designer Yusuke Kozaki have teamed up for the most anticipated adventure game of the year! Go behind the scenes of Spike Chunsoft's AI: THE SOMNIUM FILES. 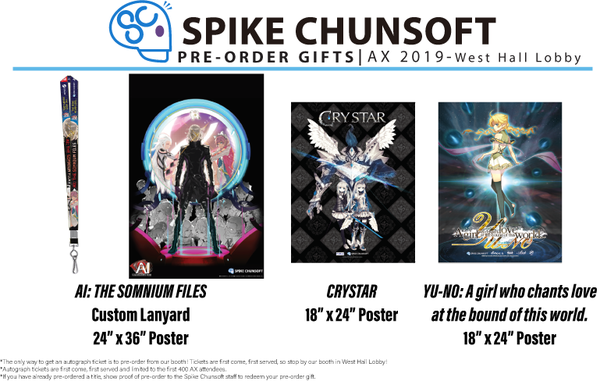 Visit the Spike Chunsoft booth in the West Hall Lobby to pre-order games and get Anime Expo exclusive items!

Pre-order AI: THE SOMNIUM FILES at our booth and get these Anime Expo exclusive items:

18" x 24" Poster
Autograph ticket
Pre-order YU-NO: A girl who chants at love at the bound of this world. at our booth and get this Anime Expo exclusive item:

*If you have already pre-ordered a title, show proof of pre-order to staff at the Spike Chunsoft booth to redeem your pre-order gift.

Thanks to Dondom95 for the heads up!
Source: Link, Link
Rating: 0

I probably won't be getting the next wave of StreetPass Mii Plaza games as what I'd want from Spike-Chunsoft, but I suppose I'll be waiting in line to see this. (Unless a panel I'm interested in more happens at about the same time.)