The Ninja Warriors: Once Again renamed The Ninja Saviors: Return of the Warriors for localization 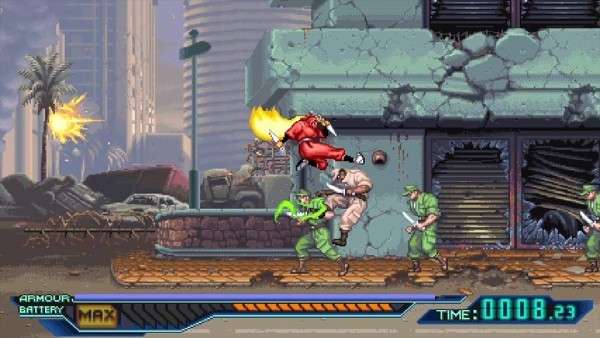 Earlier this week, TAITO confirmed that they were bringing their latest Ninja Warriors title to the Switch in North America and Europe. We've been covering this game for quite some time now via the Japanese side of things. Over in Japan, the title is called The Ninja Warriors: Once Again. Thanks to the ESRB, we now know that the English version is called The Ninja Saviors: Return of the Warriors. Check out their game summary below.

This is an arcade-style action game in which players control one of five ninja androids through missions to overthrow the government. Players traverse side-scrolling levels and use punches and weapons (e.g., blades, kunai, nunchucks) to battle soldiers and enemy ninjas in constant combat. Battles are highlighted by cries of pain, explosions, and screen-shaking effects. Red blood-splatter effects occur when enemy characters are hit. Some female ninjas are depicted with jiggling breasts; a handful of enemies wear outfits that partially expose the sides of their breasts.

Would have been better as The Ninja Warriors: Return of the Saviors.