Does Genshin Impact rip off Zelda: Breath of the Wild? 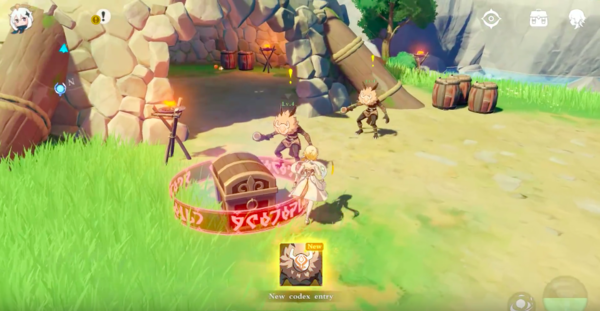 Genshin Impact is a mobile/PC game that is currently in closed beta. Since the first trailer, fans have pointed out that the game looks a lot like Zelda: Breath of the Wild. Some claim it's more of a rip-off than a tribute. I mean, just in the screenshot above, you can certainly see that the game is walking the razor's edge when it comes to inspiration over appropriation.

Beta players are now seeing just how closely Genshin Impact mimics Zelda: Breath of the Wild. The game's opening moment looks almost exactly like Zelda: Breath of the Wild. The item management is extremely similar as well. Your main character can climb the overworld, but is limited by a stamina gauge. The game's enemies hide out in buildings extremely similar to where Bokoblins hang while waiting for Link. The comparisons go on and on.

Does Genshin Impact come to close to the game it's clearly inspired by, or is there enough of a difference for the two games to exist without Nintendo getting worked up?

The inspiration of Zelda is definitely there. lol. It's nice looking, I'll give it that.

It has it's bitter moments where you're like "Wow, that's straight up Zelda, lol" but the originality is there. I just wish they went all the way trying to give it a bit more of it's own identity.
I'm fine with stuff "inspired" by other titles, and I would definitely say this is that. Just that its inspiration is a little thirsty in those cases.

To be completely fair, as Chinese video games go, this one's pretty damn respectful rather than being a straight-up re-skin that people are accusing it of.

You know, if this game was coming to switch I'd probably get it.

There is work in it. Also, everything it "steal" from Zelda are good things. They have their own things too. Like the combat is much more "korean rpg"-ish.
(BTW, My headcanon name for it is "Breath of the Waifu". :P)

I hope this game is released for Nintendo Switch, but with a few minor changes:
- Title -- "The Legendary Xander: Heart of the Wilderness"
- Takes place in a vast world known as Hayrole
- You play as Xander, a hero awakened from a ten-year slumber
- You must rescue your sister, Princess Xarda, from the evil monster Catastrophe Garon
- Along the way, you will encounter helpful races such as the fish-like Soras; the stone-golem Borons; the bird-like Leetos; and the desert-dwelling Heroodies
- Find the ultimate weapon, the Sword of Mastery, to aid in your quest to defeat Catastrophe Garon

Also there is DLC that includes a motorcycle shaped like a camel.

Devils Advocate: why does this game get questioned as being dubious but Blossom Tale is celebrated?