Yooka can lose Laylee in Yooka-Laylee and the Impossible Lair, and second versions of levels can be unlocked 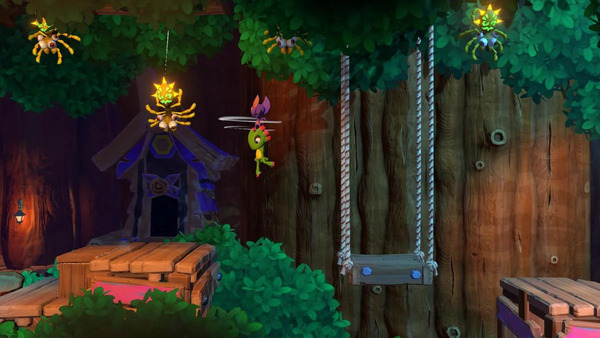 A few more tidbits about Yooka-Laylee and the Impossible Lair have come in. Some of you might have picked up on this during Treehouse Live segments, but I think this info is important enough to warrant a post of its own.

- without any Beetalion members, Yooka and Laylee can take one hit and still recover
- that hit makes Laylee freak out and start flying away
- if Yooka can catch her, Laylee will join you again
- if Yooka can't catch her, one more hit will kill Yooka, and Yooka also can't do moves like the mid-air twirl and the butt stomp
- certain activities in the overworld will unlock a second version for each level
- the second version of a level will play significantly differently from the original
- examples of stage changes for the second version include changing a level to a swimming stage, or rotating a stage 90°

Getting Yoshi's Island PTSD. Does Laylee cry like a baby too? =P