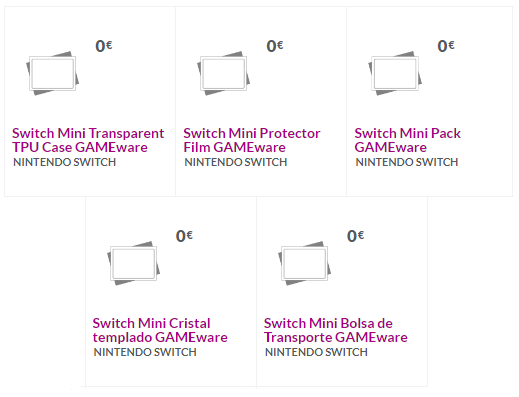 That's what's going on today, as GAME Spain has added listings for all the items seen in the image above. There's no pics or item information to go along with the accessories, but just their listing alone is enough to fuel the Switch Mini rumors even more.

UPDATE - The listings have since been removed. As to what that means, it could go either way. We've seen retailers accidentally confirm games/hardware with listings that were shared early, and also seen retail listings that were incorrect. Your guess as to which is going on here is as good as mine.

Oh man... Just show it already, Nintendo. And while at it, show us the Switch Pro also. That's what's important.

I find it incredibly unlikely that Nintendo only set their (to be fair, low) fiscal year expectations for Switch at 18 million units with all the software already releasing this fiscal year and the Switch mini clearly coming this year, and also plans to release a second hardware redesign this fiscal year. I'd say a safe bet for Switch Pro is early next fiscal year, still enough time between that launch and next gen. If thats the case, then I don't expect to see it announced until next calendar year. Most devs won't have much to show right now, and there is no reason for Nintendo to announce any hardware redesign earlier than say 3 months before launch.

Oh I am sure they will wait with it and go for the Mini first, but for those like me who can't care less for the mini and want to see what the Pro is all about, all that sucks. Oh well, I'll just wait it out and enjoy the Switch as is until then.

I mean, to be fair, I doubt Nintendo is going to be spending much time hyping the mini up to us, I wouldn't be shocked if its announced in a random trailer upload in the middle of July, with press releases, a site, and tweets to go alongside it of course, and then in say, late August, full mainstream marketing ramps up (TV CM, billboards, web ads, etc.) and thats how Nintendo reaches the target market for the product. I don't see a full 20 minute Direct focused on it or anything like that.

Thing is, I see a LOT of people say they'll wait for the Pro, or info of it before they get a Switch. But yeah, saying it's in the works and is due NEXT year would hurt the sales of the Switch as is I guess. Tough market, eh?

I don't know how they'll advertise the mini. But if it can't at least dock I think they'll be laughed at by many. The no-switch Switch.

No way it won't dock. Its going to have the USB-C either way for charging. Assuming it doesn't come with a dock, even if there isn't a more pricey (say $250, would need controllers of course) SKU with the mini dock, they could sell a mini dock separately for like, $40 at retail. More revenue later on isn't something Nintendo would say no to.

So you get the cheap mini, but have to get expensive controllers and an expensive dock to play on TV... Great. Get a normal Switch then.

I just said I think it is possible they will offer a $250 SKU for a Switch mini with a mini dock and 2 joycon. Obviously it doesn't cost Nintendo close to $170 to produce a dock and 2 joy con, they way overprice those individual peripherals at retail. Assuming the dock costs a bit less than the regular Switch dock, I see no reason why they can't sell a Switch mini with the dock and joycon for $250

(Switch mini alone is going to cost less to produce than a base Switch, its not just cheaper because they are taking away the dock. It is estimated it costs Nintendo $250, and that has dropped since launch, to produce a base Switch, so even with that they wouldn't lose money if they cut the price down to $250 with the dock and joycon. No fan, a smaller Tegra, and Nintendo is going to be spending a lot less on the mini. With Joycon and a Mini dock, which I would hope would be cheaper to make than a base Switch dock, $250 should be perfectly profitable, with a $200 mini only SKU available for those who want it.)

Also, if someone decides they only want to spend $200 now but a few years down the line decide they want to invest in a dock, then it would work well as well. They shouldn't have to spend $300 if they don't need the dock yet when they first get it.

The big question is: will the mini have detachable Joy-Cons or not? If so, then all is good. If not, then I find the "Switch" mini to be somewhat silly. But then again detachable JCs cost more somehow? Some games dont even work with them attached and was a HUGE point of the Switch. I get that they'll take out HD rumble though. It's just if you want to play on the TV from the get-go then you need extra controllers (if JCs are non-detachable) and a dock, so it seems like it's back to square one... Actually maybe table-top mode wont be a thing, which was also a big selling point.

Yeah, I'm sceptical as Hell for this, but as a Nintendo fan and gamer in general I am curious.

Also, as mentioned before, a lot of people are waiting to hear about the Pro. Just got a question from a buddy about that a last night. That''s also obviously a huge interest for many. The "hardcore" gamers.

Oh well. Enough specualtion from me. Have a nice day, Ben.

Honestly I never found tabletop to be a real selling point (and its even less of a mode, its just handheld mode with wireless controllers....)

Bluetooth costs money, so does the rail system, also removing the rail will allow them to cut down the size.

If there is no way to connect it to the dock, it will be a massive mistake. I think it will still be bleh if it can be docked but they don't have a middle tier SKU which offers a mini dock and at least a controller, so that games like Mario Party can be played. But obviously most people with a Switch now are going to be far more interested in the Pro ( me included).

I still think the best market for this mini is going to be Japan, because base Switch still isn't portable enough for a lot of people who want to bring it on the go there. I am going to be very worried if NoA tries to do a kid-focused marketing approach of this, and we know they will.. They haven't fully learned that the reason the Switch marketing has worked so well in America and worldwide was because they stopped using kids at first, not just because they better explained the product.

Tabletop mode was actually a very big selling point to me. I don't really play much in handheld (OK, some games before I go to sleep are actually pretty good. And with a good headset the sound is truly great) but tabletop is just an awesome idea. The entire "I'm out and about and meet a buddy. Whah! Let's play MK8 here in the park together. Everything we need to play together is already here!" thing us just damn awesome. And the "anywhere anyhow" thing would go away without it. When I'm in the kitchen "observing" my food I can take a round of Smash with the Pro controller and Switch in TT mode. It's perfect for things like that- And also gives an arcade feeling. Yikes, I wrote a lot about that one feature. But for all I know I could be in the minority.

Yeah. The Pro IS what we "hardcorez gamerz" want and that's why many people are waiting to get a Switch. I still say the best they could do is to have a full "set" with dock/JCs etc and one option with just the stronger "tablet" and we get to use all our old stuff. Now THAT would be great.

Oh gawd! If NoA fucks this up...One of the things with the Switch at first was how damn awesome the advertisement was. And in the "Finally getting away from the kiddie image" way. Please learn from past mistakes...