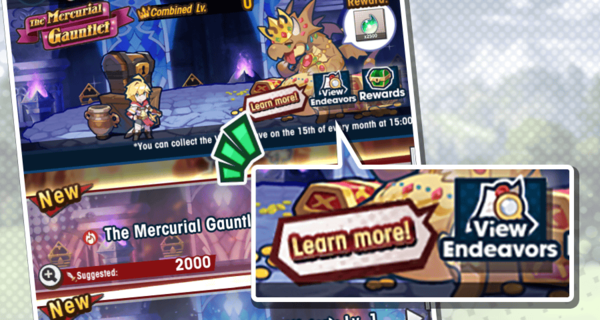 Dragalia Lost is getting a major update on June 27th, 2019. This will bump the game up to Version 1.9.0, and you can check out full patch notes for the update below.

It will now be possible to further upgrade adventurers, weapons, dragons, and wyrmprints.
By using certain items on the Upgrade screen, you will be able to increase HP and strength up to +50.
This feature will unlock after completing Chapter 9 of the main campaign, which will release 8:00 AM, Jul 15, 2019.
We hope you’re looking forward to its release!

The maximum level for the various elemental altars and dojos will be raised to 35.
Note: This change will be applied around 8:00 AM, Jun 28, 2019.

You will be able to check whether you have already obtained the daily bonus for event quests from the event quest list.

It will also be easier to tell whether the Expert difficulty is available for Elemental Ruins quests.

Lastly, it will be easier to tell what the unlock conditions are for event quests you cannot challenge yet.

・Added a button to check The Mercurial Gauntlet endeavors
A button that will allow you to check the list of endeavors you can complete will be added to the quest selection screen.

Wyrmprints will now drop in the following quests.

The following issues have been fixed in this version:

・After an adventurer used a skill that grants modified force strikes, the remaining number of affected force strikes was not reset when the same skill was used again again before all modified force strikes had been used up. Affected adventurers include Fritz, Vida, Nefaria, Hawk, Dragonyule Nefaria, Sazanka, and Gala Ranzal.
・When an adventurer used a buff that grants a Shield while already under the effects of a lesser Shield buff, the better Shield effect was not applied.
・If the issue above happened while in co-op, the buff effects from other players’ adventurers sometimes did not display correctly.
・When an adventurer received an attack that inflicts Dull while already being affected by Dull, the affliction’s effect timer was not reset.
・In Void Zephyr Strike, sometimes the additional attacks from Naveed’s Crystalline Blades skill did not hit.
・When auto was enabled, sometimes Veronica would use her Nosferatu skill even when no enemies were in the area.
・Sometimes energy levels did not increase when using Annelie’s Stunning Display skill.
・Sometimes the effects of fafnir statues placed in the castle grounds were not properly applied to the stats displayed on the Teams screen or adventurer details screen.
・When an adventurer or enemy’s attack marker disappeared (for example, when the adventurer is defeated or the enemy enters the break status), attack markers with the same shape created by other adventurers or enemies sometimes also disappeared.
・When the Last Boost ability of another player’s Marth activated during co-op, the skill gauge charging effect was not applied if your adventurer was currently in the middle of a skill animation.
・Sometimes buff effects were not applied to other players’ adventurers during co-op.
・When an adventurer shapeshifted while a buff and debuff with the same effect were applied, both the buff and debuff were removed.
・In the Raging Manticore Strike quest, when the raging manticore was in its Fury state and an adventurer attacked with a weapon that has Overdrive Punisher, the effect was not displayed.
・Sometimes damage-increasing abilities for certain wyrmprints were not applied to damage from poison.
・The effects of “Energized: X” abilities were not triggered when an adventurer entered the energized state as a result of a wyrmprint’s ability.
・Moving from the main event screen for The Mercurial Gauntlet to any quest selection screen caused the stamina and item information to stop displaying.

The biggest change they can do to this game is releasing it in other regions.

It's still not released here in france. Is it available in other country in europe ? I know it's in the uk, but I don't understand this game's releases

Still waitin for it here in Mexico.