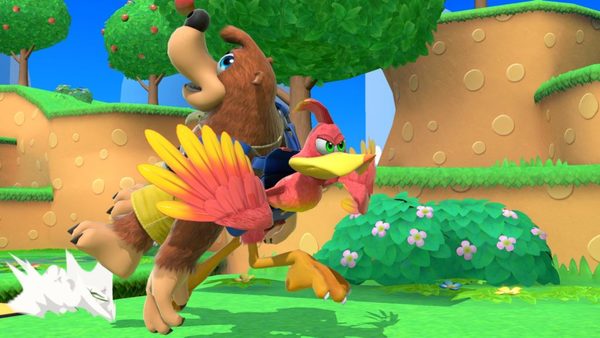 Banjo and Kazooie are coming to Smash Bros. Ultimate, and fans couldn't be happier. The reveal of the duo for Smash Bros. Ultimate may very well be the biggest reaction the Smash community has ever let loose with, showing just how popular the bear and bird are to this day. You would think that would lock-in development of a true sequel, right? Original Banjo-Kazooie composer Grant Kirkhope isn't so sure.

In an interview with VideoGamesChronicle, Mr. Kirkhope talks about the likelihood of a sequel, the reaction from Smash Bros. fans, and how a sequel could come together. Check out his full response below.

“My honest opinion is I don’t know if they’ll ever be a new Banjo. It’s easy to go, ‘look at these numbers’, but it might be a drop in the ocean for Xbox. Is there a market for it? I just don’t know. I would think that Rare probably doesn’t have the appetite for it. They’re super busy with Sea of Thieves and that’s a gigantic game: it’s going to take the whole studio to keep making content for that.

Maybe the E3 reception has made Microsoft think about it, but the trouble is, if I say anything more definitive than that then the fans will think I’m in the know! When really, I’m just a composer. I have no connection to that decision what-so-ever. Gregg Mayles and Tim Stamper are the real inventors of Banjo… I’m just the most visible on social media.

They (Nintendo) were surprised by how crazy it went. The E3 reveal seemed to be gigantic. When I was speaking to Nintendo back at their booth at E3, they were all saying it was a bigger reaction than they’re normally used to for Smash. So Nintendo did recognize that it was a big deal. They were surprised. And we all were: it was such a huge release for all those fans who’ve been waiting so long for a new game.

Rare need to find somebody like that who gets the game, who really loves it, gets the humour, comes up with a great plot and then kicks on. They would need to find an external studio who really cares about the project and wants to do it, like they did with Killer Instinct and also similar to how Ubisoft Milan did a great job with Mario + Rabbids.”

I do believe it could happen. But I don't think it'll ever reach the highs of the first game. It seems that's something harder to do now. Aside from Mario and The Hat in Time I can't think of many good 3D collectathons.

"Not sure" is the correct response from him, since he's not in the know. Besides, if there's ever confirmation for it, it's going to come from the company itself, not from asking someone who would likely be on the team. If another Banjo game is in the works, there will definitely be NDAs going around that will create more "not sure" responses from the rest of the team.

The only thing that "will never happen" again is confirmation of major projects (and even most minor ones) from random people on the team when fans ask them. These things are planned out in advance. Anything else is a leak.

Who says Rare has to do it? They can give it to another better dev like they did with Killer Instinct.

Either sell the Banjo IP to Nintendo so someone like Retro or Next Level can make it. Or Microsoft contact Playtonic and have it be a joint project between Playtonic and current Rare.

It's not that we don't want the ips back but rather the devs themselves don't have interest bringing them back.