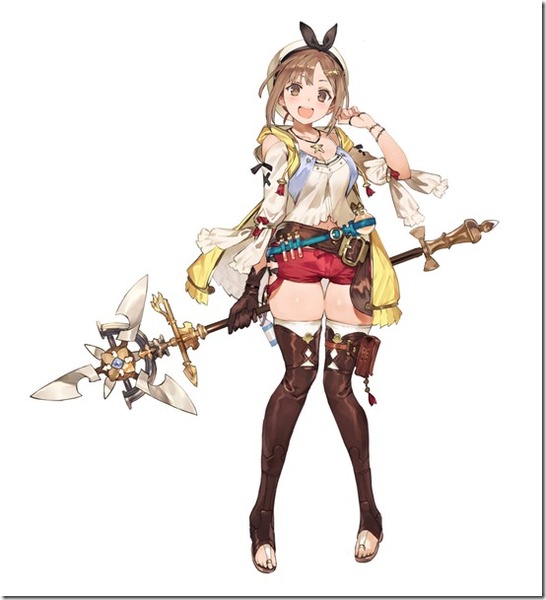 The gang at 4Gamer recently sat down with Atelier Ryza’s producer Junzo Hosoi to talk about various aspects of Atelier Ryza: Ever Darkness & the Secret Hideout. In the snippet below, you can read up on the struggles of finding a design for Ryza, the main character.

4Gamer: The character designs give off quite a different impression this time.

Hosoi: “Right. On that note, the designs were very difficult to navigate. No matter how much we tried, there was a gap between the worldview we had in mind, and what Toridamono-san had in mind. The Atelier characters drawn by Kishida Mel-san, NOCO-san, Yuugen-san and the others up to this point were very flowery, and what you would call girly.

On the other hand, Ryza, the protagonist of this game, was “a regular girl who’s defining feature was that she didn’t have defining features”, and “a girl from a rustic village”, which we decided from the start. However, the entire team up to that point were dragged down by the design image up to this point, and couldn’t decide upon Ryza’s design.”

4Gamer: Being asked to create “a normal girl” is probably even harder.

Hosoi: “That’s right. So, firstly we decided to go with a design that was “normal as felt by Toridamono-san”, but it seems they were quite troubled over it, and so the days were mired in agony.”

Hosoi: “In our view, Toridamono-san’s characters are very appealing, rustic and idyllic, and we believe it fits the image of the game perfectly. Because of this, we’re relieved just from the fact that we somehow made it through this.”

Well, they nailed it, whatever the case may be. Ryza is adorable and instantly likable. I'll be playing this for sure assuming it makes it to America unscathed by ideologues who want to tell me what I'm allowed to see and hear.

"All for the Greater Good"


I lol'd so hard at that line. Pretty sure that she has a very...very defining feature.
Spoiler
Them thighs.

Okay, so we have thigh-high leather tights, quasi-sandals that end in a second-toe ring, one leather glove, a very busy ruffly tunic, and a giant thigh gap. I think they really nailed it.