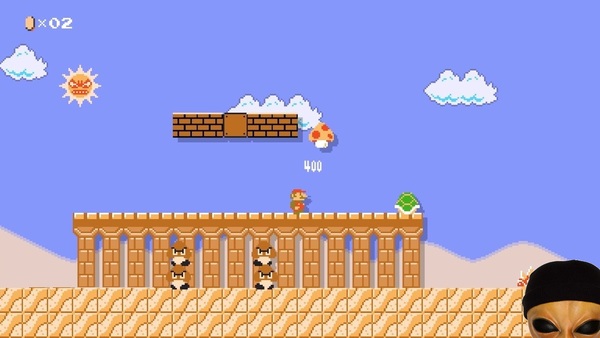 I guess Nintendo's in a banning mood today! First up, they removed a Super Mario Maker 2 level by master course creator GrandPooBear, and now they've yanked a stage named "Storm Area 51." The stage was removed due to “inappropriate or harmful content.”

With this stage's removal, I can at least see the reasoning. For those who don't know, the "Storm Area 51" movement is aiming to get people to actually storm the real-life Area 51 on Sept. 20th, 2019 to see what the government is hiding. This has actually lead to the U.S. Air Force warning people not to enter the area, as it's illegal to do so, and the area is used for military training. Nintendo simply doesn't want anyone taking the advice of random people, which could get them into trouble at Area 51.

I'm not a fan of that, I don't really know this meme too well but I doubt it's some kind of actual threat against anyone.

I was under the impression that they were thinking people would actually storm Area 51 and get themselves killed in the process. It's not really a threat, just a dumb fad that was encouraging people to do something reckless.

Wait, do we actually know where Area 51 is at now?

Haven’t we always? It’s never been a secret location, just a mystery/urban legend as to what goes on there

I feel like I remember several pop culture jokes about finding Area 51 (for instance, Lisa accidentally found it in an episode of The Simpsons).

Nintendo is like a sweet grandma I never had🤣

I’m really curious to go to Area 51. Lol there’s a chance that I won’t go there. That’s a shame but hey it’s better that way.

If they waited to pull this meme out a bit closer to the date, I'm sure a bunch of people would actually turn up, which would be hilarious. As it is now, the meme will be long dead by then.

This is kinda ridiculous. Nobody was going to Area 51 just based on this one level. Did any of you get to play it? Was it actually any good? All they did by deleting it was bring more attention to it than it would have gotten had it been allowed to stay up.

I guess if it breaches their terms of service they can do this, but that's pretty ridiculous. It's just a joke.

To be fair, the whole meme is dumb. Tide pods weren't an actual threat until people started making it a meme too and then suddenly dumb teens started doing the challenge. It seems harmless enough but from Nintendo's eyes, they could be accused of promoting this kind of behavior. With how the US legal system works (or doesnt) I can't blame them for airing on the side of caution

Honestly exactly how I feel too. The 'meme' isn't funny, and it was even born out of people who actually want to storm the place. It's stupid, and definitely, 99.9% of the people who use the meme now will have forgotten it come September 20th, but there are still plenty who seriously are wanting to storm the place, and I just can't condone that.

Tide pods are a good simile. I hated that meme equally, because there was nothing funny about it. It was just dumb, and too many people were also serious about it.

As such, I can't blame Nintendo either for this, despite how many people claim "It's just a joke"